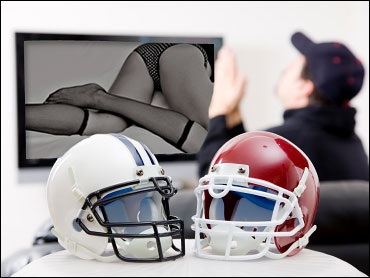 A Tucson television station's broadcast of the Super Bowl on Sunday was interrupted for some viewers by about 10 seconds of pornographic material, the station said.

KVOA TV in Tucson released a statement saying that the only viewers who were able to see the material were those who receive the channel through Comcast cable.

The station said it will investigate the incident.

"When the NBC feed of the Super Bowl was transmitted from KVOA to local cable providers and through over-the-air antennas, there was no pornographic material," KVOA president and general manager Gary Nielsen said in a statement.

The KVOA statement said the station was dismayed and disappointed that some Comcast customers and their families were subjected to the material.

"KVOA will continue to investigate what happened to our clean signal and make sure our viewers get answers," Nielsen said in the statement.

Comcast spokeswoman Tracy Baumgartner confirmed that the company's standard feed was interrupted during the Super Bowl, although she said its high definition feed was not.

Tucson media outlets reported that they received calls from irate viewers about the pornographic material.

A spokesman for Cox Cable said the company had not been affected.

"We have received no evidence that any inappropriate material was broadcast on any of our channels during the Super Bowl," Mike Dunne said. "The alleged incident appears to be isolated to the Comcast territory. We will offer our support to all appropriate organizations to help them determine what happened."

Joel Hilander of Tucson told The Associated Press that he and his young children saw the clip.

He said the interruption came just after the Arizona Cardinals' Larry Fitzgerald scored on a long touchdown reception during the final minutes of the game.