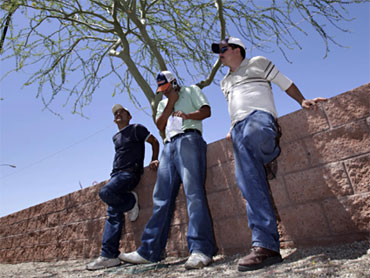 Many of the cars that once stopped in the Home Depot parking lot to pick up day laborers to hang drywall or do landscaping now just drive on by.

Arizona's sweeping immigration bill allows police to arrest illegal immigrant day laborers seeking work on the street or anyone trying to hire them. It won't take effect until summer but it is already having an effect on the state's underground economy.

"Nobody wants to pick us up," Julio Loyola Diaz says in Spanish as he and dozens of other men wait under the shade of palo verde trees and lean against a low brick wall outside the east Phoenix home improvement store.

Many day laborers like Diaz say they will leave Arizona because of the law, which also makes it a state crime to be in the U.S. illegally and directs police to question people about their immigration status if there is reason to suspect they are illegal immigrants.

Supporters of the law hope it creates jobs for thousands of Americans.

"We want to drive day labor away," says Republican Rep. John Kavanagh, one of the law's sponsors.

The law's supporters hope the departure of illegal immigrants will help dismantle part of the underground economy here and create jobs for thousands of legal residents in a state with a 9.6 percent unemployment rate.

Kavanagh says day labor is generally off the books, and that deprives the state of much-needed tax dollars. "We'll never eliminate it, just like laws against street prostitution," he says. "But we can greatly reduce the prevalence."

Day laborers do jobs including construction, landscaping and household work for cash paid under the table. Those jobs have been harder to find since the housing industry collapsed here several years ago.

Standing near potted trees and bushes for sale at the Home Depot, Diaz, 35, says he may follow three families in his neighborhood who moved to New Mexico because of the law. He says a friend is finding plenty of work in Dallas.

Diaz says he has too much to lose by staying - he's supporting a wife and infant son back home in Ciudad Juarez, Mexico, across the border from El Paso, Texas.

"They depend on me to survive," he says. "I'm not going to wait for police to come and arrest me."

Jose Armenta, a 33-year-old illegal immigrant from Mexico's western coast, is already planning to move to Utah within the next 20 days because of a combination of the economy and the new law.

"A lot of people drive by," he says as he watched nearby cars speeding past, "and they yell, 'Hey, go back to Mexico!"'

Analysts say it's too soon to tell what lasting effects the law will have on the state's underground work force, which also includes baby sitters, maids and cooks.

A study of immigrants in Arizona published in 2008 found that non-citizens, mostly in the country illegally, held an estimated 280,000 full-time jobs. The study by researcher Judith Gans at the University of Arizona examined 2004 data, finding that they contributed about 8 percent of the state's economic output, or $29 billion.

Losing hundreds of thousands of unskilled laborers wouldn't hurt the state's economy in the short term, but it could limit the economy's ability to grow once it recovers, says Marshall Vest, director of the Economic and Business Research Center at the University of Arizona's Eller College of Management.

Legal workers who are willing to take any available job now will become more choosy if the unemployment rate falls back to low levels seen before the recession hit.

"That's really the question, as to whether the existing population is willing to work those (low-level) jobs," Vest says. "I think economics provides the answer. If job openings have no applicants, then businesses need to address that by raising the offered wage."

Some illegal immigrants, however, intended to stick around.

Natalia Garcia, 35, from Mexico City, says she and her husband - a day laborer - will stay so their daughters - both born in the U.S. - can get a good education and learn English. The couple have been living in Arizona illegally for the last 10 years.

"Mexico doesn't have a lot of opportunities," she says. "Here, we work honestly, and we have a better life."

Olga Sanchez, 32, from southern Mexico, lives in Phoenix illegally with her two brothers, who are 21 and 17. While the youngest boy is in high school, all three work and send money back home to their parents.

"This law is very bad for us," says Sanchez, who gets about $250 a week cleaning three houses. "I'm afraid of what's going to happen."

She says the family is going to wait and see if the law takes effect and what the fallout will be before deciding whether to leave. The law is certain to be challenged in court; Phoenix, Tucson and Flagstaff already are considering lawsuits.

"All I ask from God is a miracle for us to stay here and work," she says.