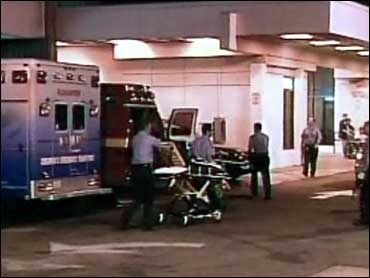 A woman who lay bleeding on the emergency room floor of a troubled inner-city hospital died after 911 dispatchers refused to contact paramedics or an ambulance to take her to another facility, newly released tapes of the emergency calls reveal.

Edith Isabel Rodriguez, 43, died of a perforated bowel on May 9 at Martin Luther King Jr.-Harbor Hospital. Her death was ruled accidental by the Los Angeles County coroner's office.

Relatives said Rodriguez was vomiting blood and writhing in pain for 45 minutes while she was at a hospital waiting area. Experts have said she could have survived had she been treated early enough.

County and state authorities are now investigating Rodriguez's death. Relatives reported she died as police were wheeling her out of the hospital after the officers they had asked to help her arrested her instead on a parole violation. Sheriff's Department spokesman Duane Allen said Wednesday that the investigation is ongoing.

In the recordings of two 911 calls that day, first obtained by the Los Angeles Times under a California Public Records Act request, callers pleaded for help for Rodriguez but were referred to hospital staff instead.

"I'm in the emergency room. My wife is dying and the nurses don't want to help her out," Rodriguez's boyfriend, Jose Prado, is heard saying in Spanish through an interpreter on the tapes.

"What's wrong with her?" a female dispatcher asked.

"OK, and why aren't they helping her?" the dispatcher asked.

"They're watching her there and they're not doing anything. They're just watching her," Prado said.

The dispatcher told Prado to contact a doctor and then said paramedics wouldn't pick her up because she was already in a hospital. She later told him to contact county police officers at a security desk.

A second 911 call was placed eight minutes later by a bystander who requested that an ambulance be sent to take Rodriguez to another hospital for care.

"She's definitely sick and there's a guy that's ignoring her," the woman told a male dispatcher.

During the call, the dispatcher argued with the woman over whether there really was an emergency.

"You're not here to see how they're treating her," the woman replied.

The dispatcher refused to call paramedics and told the woman that she should contact hospital supervisors "and let them know" if she is unhappy.

"May God strike you too for acting the way you just acted," the woman said finally.

The incident was the latest high-profile lapse at King-Harbor, formerly known as King/Drew. The Los Angeles County Board of Supervisors is investigating claims of recent patient care breakdowns, including Rodriguez's case.

Federal inspectors last week said emergency room patients were in "immediate jeopardy" of harm or death, and King-Harbor was given 23 days to shape up or risk losing federal funding.

Dr. Bruce Chernof, director of the county Department of Health Services, which oversees the facility, has called Rodriguez's death "inexcusable" and said it was "important to understand that this was fundamentally a failure of caring." He has said conditions are improving, though.

A call Wednesday seeking comment about the 911 tapes from the department's communications office, which handles information about the hospital, was not immediately returned.