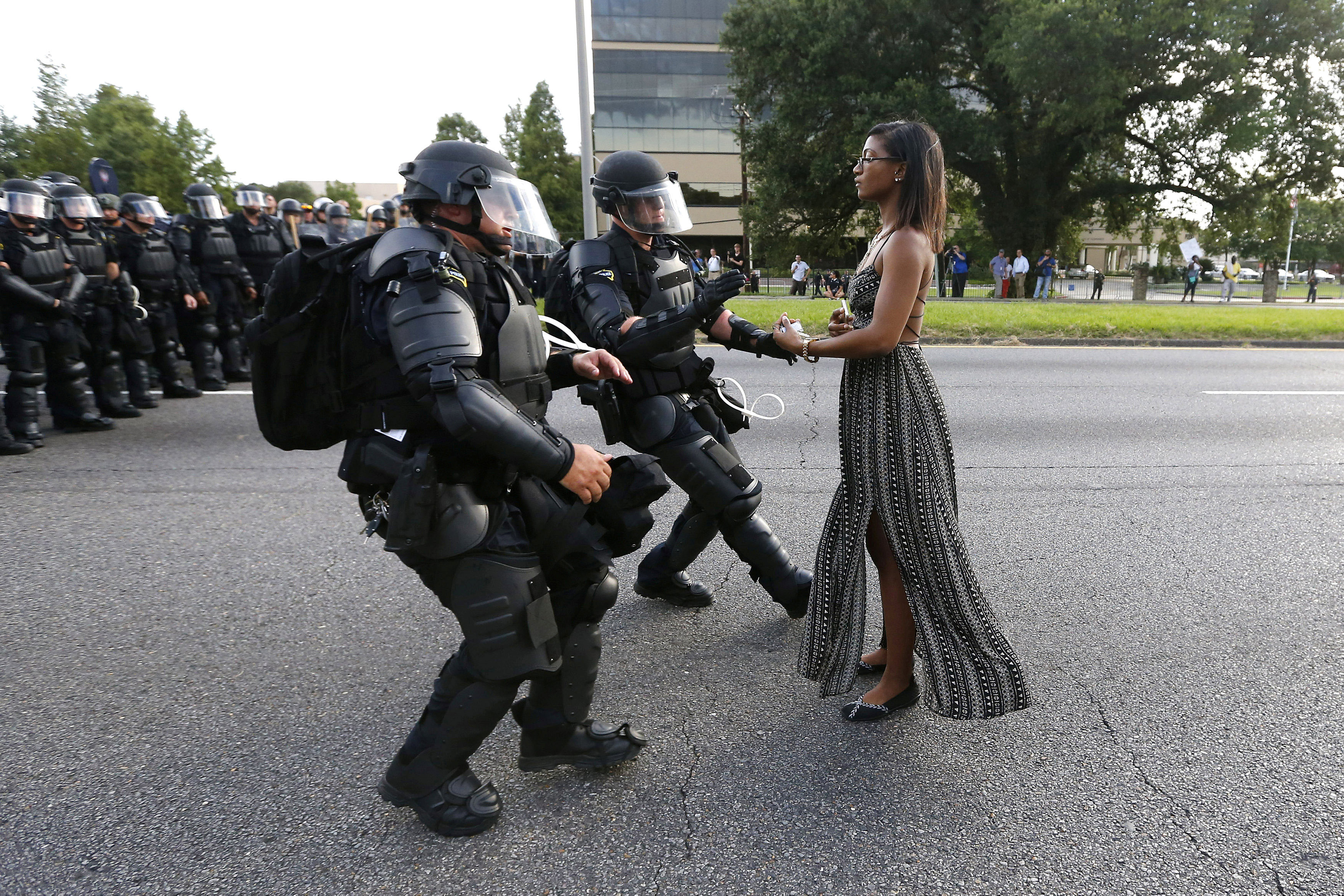 A powerful image of a female protester dressed in a sundress, standing her ground against Baton Rouge police officers during protests after a police shooting took the internet by storm.

In her first-ever protest against police brutality, Ieshia Evans stood calmly in the middle of the street - despite being told not to do so - as officers in riot gear rushed towards her.

"It was silence. It was just a lot of nonverbal communication," Evans told "CBS This Morning" co-host Gayle King. "Sometimes, silence speaks volumes."

"What did you want your silence to say?" King asked.

Despite being confronted by police fully clad in body armor, Evans appears seemingly placid in the photo. She said she had "no fear in my body."

"It's when you see these officers and you see their gear... and I see his gun. They look impenetrable compared to me with no armor in the sundress... but there was no fear," Evans said.

The now-iconic photo has since been hailed as a symbol for peaceful demonstrations against police brutality. It has also been likened to photos captured in past civil rights protests as well as one of the takeover in Tienanmen Square in China that captured a man staring down the tank. For Evans, the comparisons give a powerful sense of a purpose.

"It means that God has chosen to put me in a position to make a difference, make a change," Evans said. "It is more than me, it is more than myself. So here I am, I have a responsibility to do something.

Evans was arrested for the first time shortly after the photo was taken, in what she said was her first protest against "all the injustices before."

"I felt like I was just a bystander and I had - you have a choice as a human being to do something or to not do something. I chose to go to work the other times during the other protests. I chose to pay those bills, to put the food in the refrigerator," Evans said. "Once the opportunity presented itself, it was just like, 'yeah, definitely.'"

When the video of Alton Sterling surfaced, Evans said she couldn't get herself to watch it right away.

"It literally rendered me numb. I couldn't cry, I couldn't scream, I couldn't break anything. I was just numb," Evans said.

Then another video of the police shooting death of Philando Castile in Minnesota surfaced the next day.

Her arrest from the protest called for an honest conversation with her six-year-old son, Justin.

"He said, 'why did you go to jail? I thought only bad people go to jail,'" Evans recalled. "I didn't have an answer for him. I told him that sometimes, that's not the case. And that was the best answer that I could give to my son at that moment."

But the experience has marked an important turning point for Evans.

"Do you see yourself as an activist?" King asked.

"Before this? Not really. I wouldn't really call myself an activist. I have a passion for my people. I love my people," Evans said. "So I never really considered myself to be in the definition of brave. But sometimes, jobs are given to you that you're not really-- you didn't apply for. You know?"