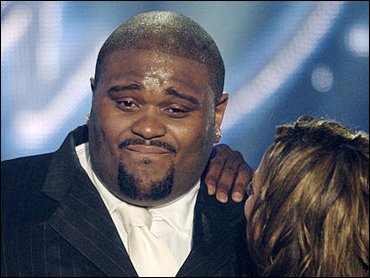 "American Idol" winner Ruben Studdard won't have time to rest on his laurels - he's spending this weekend in the studio to work on his debut album, which is slated to come out by September.

Studdard, who edged Clay Aiken to win the second "American Idol" competition on Wednesday, has already been signed to J Records, founded by music mogul Clive Davis. And his first single, "Flying Without Wings," which Studdard sang during the competition, will be released this week.

Davis, who will be the executive producer of Studdard's disc, has shaped the careers of artists like Whitney Houston and Alicia Keys. He said Studdard "could very well be a major recording artist for many years to come."

Kelly Clarkson was crowned the first "American Idol" last September, and has since had a No. 1 single and album.

Studdard, whose sensual tenor is reminiscent of fellow J Records artist Luther Vandross, will record a mix of pop, R&B, and hip-hop-influenced tunes; there's even talk of a collaboration with rapper Fat Joe, one of Studdard's favorites, said Davis.

Already, Davis said he has fielded calls from top producers who want to work with the 24-year-old Birmingham, Ala., native.

Is Davis trying to mold Studdard, who sang mostly love songs on "Idol," into the next Vandross or Barry White? "We're not putting blinders on," Davis said. "We want to make it as exciting (as possible)."

Although Aiken, 24, lost the competition, he is also going to start work on his own album, to be released by RCA Records. His first single, "Bridge Over Troubled Water," is also expected to be released within a few days.

The margin of votes between Aiken and Studdard was so close, it apparently confused host Ryan Seacrest. He announced the number of votes that separated them as about 13,000 at one point and about 1,300 at another.

The actual spread was about 130,000 votes, said Fox spokesman Scott Grogin on Thursday.

"It's simply a case of someone misspeaking on live television," Grogin said.

The tally announced by Fox never changed, Grogin said. Out of more than 24 million votes cast, Studdard received a total of 50.28 percent while Aiken got 49.72 percent, the network said.

Shortly after Seacrest gave the first inaccurate figure, a publicist for the show told reporters at the Universal Amphitheatre about the error and said that the correct figure, about 130,000, would be announced later.

Seacrest, however, announced a second wrong figure on air.