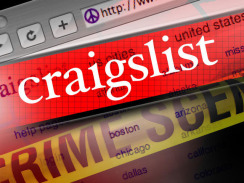 (CBS/AP) TWIN FALLS, Idaho - An Idaho man is accused of encouraging men to rape his wife through a posting in the "casual encounters" section of Craigslist.

The 32-year-old Twin Falls man was arraigned Monday on a charge of solicitation of rape and burglary. His bail was set at $100,000.

According to CBS affiliate KMVT, police say the suspect admitted he was involved in two separate instances of men forcing their way into his home and attempting to assault his wife.

The Associated Press is withholding the suspect's name to protect the alleged victim's identity.

Prosecutors say that without his wife's knowledge or consent, the man posted a classified ad posing as a woman who fantasized about being raped, and then exchanged emails with the men who responded to arrange the assaults.

Twin Falls police were called to the woman's house shortly after midnight Thursday and again Saturday afternoon on reports that two different men had broken into the home.

The woman told police a man rang the doorbell early Friday, asked her name and then said: "I'm here for you," before forcing his way into the house.

The woman said the man chased her through the house. She went into the bedroom to grab a 9 mm gun, but the man grabbed the weapon. The gun went off during the struggle. No one was injured, and she said the man fled.

The woman also fired a shot Saturday and held another man uninjured at gunpoint until police arrived in a second incident, court records said. Investigators said the second man told police he was responding to a Craigslist ad.

"The person posting the ad told him she wanted to be forcibly raped as that was a fantasy of hers," the man told police.

Court records say the husband acknowledged setting up the attacks using Craigslist and his email account.

His preliminary hearing is set for July 27.

The allegations are similar to a case two years ago in which a man was convicted of using a "rape fantasy" posting on Craigslist to arrange an attack on his ex-girlfriend in Wyoming.

In June 2010, Jebidiah Stipe of Twentynine Palms, Calif., was sentenced to 60 years to life inprison for arranging the rape of his former girlfriend in Casper, Wyo. The man who pleaded guilty to committing the December 2009 rape, Ty Oliver McDowell, received the same sentence.