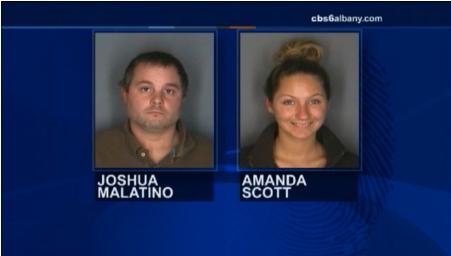 "If I have someone behind me blaring their music and offering free ice cream it's a little ridiculous," Hollister told WRGB.

Police said Malatino also called the suburban Albany headquarters of Mr. Ding-A-Ling and said "I own this town!" while claiming Sno Cone Joe controls the frozen treats market in Gloversville, a former manufacturing city about 35 miles northwest of Albany.

Capt. John Sira said Malatino was warned this spring about similar behavior last year and police stepped in after an officer saw some of the activity while on patrol.

"It's been an ongoing issue with other vendors that have been trying to sell ice cream in Gloversville," Hollister said.

Malatino, 34, and Scott, 21, both of Gloversville, were charged Tuesday with second-degree harassment, a violation, and fourth-degree stalking, a misdemeanor. A message left for their lawyer wasn't initially returned Wednesday afternoon.