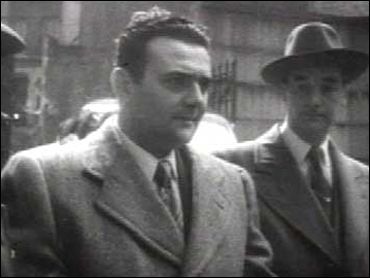 In 1953, Julius and Ethel Rosenberg were sent to the electric chair for stealing the secret of the atom bomb for the Soviet Union.

For the last 50 years, debate has been raging as to whether they were really guilty. The strongest evidence against them in court was the testimony of Ethel's brother, David Greenglass.

He confessed to being a spy, and because he cooperated with the prosecution, was spared the electric chair. He went to jail for 10 years. When he was released in 1960, he changed his name and disappeared into anonymity.

A few weeks ago, he talked to Bob Simon, providing deep insight into the enduring mystery.

Greenglass believes that he will be remembered by history as "a spy that turned his family in." He says he doesn't care.

Greenglass never tried to tell his side of the story and probably never would have if a reporter named Sam Roberts hadn't spent 13 years tracking him down. Roberts, who helped us obtain our interview with Greenglass, just wrote a book on the case called "The Brother."

The story begins in the summer of 1950 when the FBI took Greenglass in for questioning. He confessed almost immediately, and quickly implicated Julius, Ethel and his own wife, Ruth. David and the Rosenbergs were arrested. Ruth was never charged.

He says he had a deal with the prosecution. The deal: "My wife was not gonna be indicted. She's never gonna be prosecuted and she wouldn't have any problem at all from the government. And I said 'OK, now I'll tell you what I have to know.' And I told them."

For Greenglass, the deal was a simple matter of priorities. "I would not sacrifice my wife and my children for my sister. How do you like that? And that's what I told the FBI. I said if you indict my wife, you can forget it. I'll never say a word about anybody."

Greenglass made his choice when America was at war with communists in Korea, and in fear of the Soviet Union, which had recently tested its own atomic bomb. The four spies were unlikely actors in a Cold War drama: Julius was an unsuccessful engineer, Ethel spent most of her time raising their two young sons. Greenglass was a draftsman and a tinkerer, his wife was a wife and mother. All had been ardent communists.

During World War II, Greenglass, then a sergeant, was posted to Los Alamos, the secret army base in New Mexico, where thousands of scientists and soldiers were building the atom bomb. Although he had a low-level job, Greenglass says he knew what the project was.

Greenglass says Julius recruited him to spy with a simple sales pitch: "He said 'We have to help our ally.'" By ally, Rosenberg meant Russia.

Says Greenglass: "Russia was an ally at the time, and that we have to help them will all the information we get."

Greenglass told the FBI that he gave the Russians sketches and details on the device used to trigger a nuclear blast. He says he did not enjoy being a spy: "I was continually conscious of what's behind me. I didn't enjoy it. I just did it because I said I would."

Greenglass says that he didn't really understand the danger, because "I didn't think the Russians were an enemy."

His career in espionage came to an end soon after the war ended. Back in civilian life, David and Julius opened a machine shop together. They argued over the business, and over David's growing disenchantment with Communism.

In late 1949, Julius warned David that the FBI was on to them, and urged him to flee the country. David had a family passport picture taken, but he had no intention of using it.

"I didn't want to leave the United States to go to some hellhole like Russia or China, or wherever the hell he wanted to send me, or Czechoslovakia or wherever," says Greenglass. Instead, he took a bus to the Catskill Mountains. "I figured I'd find an obscure place."

Even today, Greenglass thinks it was a good plan. "I know the Catskills quite well," he says. Greenglass was soon taken into federal custody, and questioned for months by prosecutors.

When the Rosenbergs went on trial in 1951, he was the star witness for the prosecution. He told the jury about his espionage, and described the activities of Julius, Ethel and his wife, Ruth.

Greenglass says that his wife was more involved than Ethel was. That, he says, is why he didn't want her involved in the prosecution. "That was one of the things I said: 'You want my information? You gotta leave my wife out of it.'"

During two days on the stand, David described only one meeting where his sister, Ethel, played an important role. It took place in September 1945 at the Rosenbergs' New York apartment.

David testified that he and Ruth brought his hand-written notes about the Atomic Bomb to the meeting. Ethel, he said, set up a typewriter on a folding bridge table in the living room and typed her brother's handwritten notes, correcting his grammar in the process. David said Julius burned the original notes in a frying pan. Then Ruth took the stand, and told the jury virtually the same story.

That story was virtually the only evidence the government had against Ethel Rosenberg. Prosecutors argued that this typing proved she was an active participant in the spy ring. After the trial, they admitted that without the typing testimony, they could never have convinced the jury that Ethel was anything more than the wife of a spy. And that's not a crime.

Greenglass stuck to his story for 50 years. Now, he has a different recollection.

"Julius and Ethel were there, and I think my wife was there, and myself. And he asked me to write up some stuff, which I did, and then he had it typed. And I don't know who typed it, frankly. And to this day, I can't even remember that the typing took place, see. But somebody typed it. Now I'm not sure who it was. And I don't even think it was done while we were there."

He says he had no memory of Ethel typing th notes. Why did Greenglass lie on the stand? He now says Roy Cohn, an assistant prosecutor in the Rosenberg case, made him do it. Cohn went on to become Joseph McCarthy's right-hand man.

Greenglass says that Cohn encouraged him to testify that he saw Ethel type up the notes. "(Cohn) talked to me and said 'Are your sure?' He says 'Your wife says that your sister typed it.' and I said 'if she says so...'" He says he didn't realize at the time the importance of that testimony.

But the jury knew how important it was, and found both Julius and Ethel guilty of conspiring to commit espionage. Judge Irving Kaufman imposed the death penalty.

In the days before the execution, there were protests and vigils in New York, Washington and Europe. There were a flurry of last-minute attempts to get a stay of execution. There were also millions of Americans who felt that justice was being done.

Fifty years later, we know a lot more than anyone could have known in 1951. For example, we know that much of what David Greenglass said about Julius Rosenberg is true. It has been verified by other, independent, sources, all of which confirm that Julius Rosenberg was a Soviet spy. We also know that there is very little, if any, evidence that implicates his wife, Ethel, in any illegal activity.

Top secret Soviet cables – decoded by American intelligence – confirm that Julius, David and Ruth were spies, code-named "Liberal," "Kalibr" and "Osa." Ethel was never given a code name. In 1997, Alexander Feklisov, a retired Russian intelligence officer, publicly confirmed that Julius Rosenberg had reported to him. He said Ethel played no part in the operation.

We also know that the authorities used the threat of the electric chair to get the Rosenbergs to talk. Until the last minute, they were ready to commute the sentence if Ethel or Julius had cooperated, named names.

But they refused, and went to their deaths in Sing Sing prison proclaiming their innocence. In the ironic words of one of the prosecutors, they called our bluff.

Why did think Julius and Ethel maintain their silence to the end? Greenglass has an answer: "One word: stupidity. My sister was not very smart about what she did. She should've confessed."

But many saw the Rosenbergs as martyrs. There was great sympathy for Michael and Robert, their two young sons, orphaned by their own uncle.

Greenglass hasn't seen the Rosenberg children since the trial. What would he say to them today? "I would say I'm sorry that your parents are dead. You're basically the real victims of those, of the attitude of the people the time of their deaths."

He would not apologize for his role. "I can't say that," he says. "That's not true. I had no idea they're gonna give them the death sentence."

Greenglass says he had affection for his sister, and still does. "I do. I'm sorry, very sorry, that she made such a very bad decision," he says, laughing. "She should have said "I did't, I wasn't a spy, but I, I heard my husband say it.' That would have been fine." He holds Ethel responsible for her own death.

At the trial, the Rosenbergs' lawyer said in his closing remarks, "You may remember this: 'Any man who will testify against his own flesh and blood, his own sister, is repulsive, revolting.'"

Greenglass is unfazed by this quote. He says he has a clean conscience: "I sleep very well." He has never visited his sister's grave, but admits that he has been haunted by his experience 50 years ago. "To some degree, yeah. But every time I'm haunted by it, or say something, my wife says 'Look, we're still alive. We have our kids. Everything's OK.'"