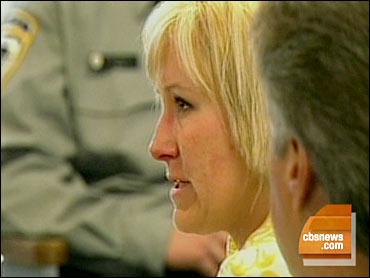 Richard Gillmore was sentenced to 30 years in prison in 1987 for raping 13-year-old Tiffany Edens.

Now 35, Edens is racing against time to prevent Gillmore from being paroled, and she met him face-to-face in court Tuesday.

"I broke into a house and raped a young girl," Gillmore testified at the parole board hearing. " ... At that time, I really couldn't see her as a person because there was no self-respect in my own life."

Edens cried as she listened to Gillmore.

Then, she took the stand herself, saying, "I fought Richard Gillmore the best I could at 90 pounds, but I wasn't strong enough. ... I was a virgin being ambushed in my own home; (being) violently raped is a grotesque introduction to sex."

Last year, the parole board recommended Gillmore be set free, despite a psychological evaluation that showed he has a 75 percent chance of raping again.

So, Edens joined the local district attorney's office in a lawsuit seeking to keep Gillmore behind bars.

Their opposition comes despite a condition of parole that Gillmore wear a GPS tracking device.

The board is expected to announce its decision within a week.

Speaking fro her West Linn, Ore. home Wednesday, Edens told Early Show co-anchor Maggie Rodriguez testifying Tuesday was "very difficult. ... I had done that just in October of '07, and it was still just as difficult, and I was ridden with anxiety. I don't think you ever will feel comfortable being in the same room with somebody that hurt you and violently raped you so aggressively."

So, why put herself through that?

"I feel that it's important because he's still dangerous," Edens replied. "The current evaluations that have been done, there was one done in June of '07, and then two recent evaluations in May of '08, and they all conclude that Richard Gillmore is still a danger and a high risk and has a high recidivism rate.

"And I don't want there to be another Tiffany. There already were several other women. He was a serial rapist. And unfortunately, he has a mental defect that is very low probability to be reformed."

Edens says she wanted the parole board members "to get a sense what it was like to be a 13-year-old girl on a Friday night doing her chores so that she could go to a movie with a friend and to have a sleepover, and then to be brutally raped and ambushed in her home. And that's what I wanted everyone in that room to get a sense of what that's like for somebody that goes through that."

Edens added that she highly doubts Gillmore's claims that he's reformed: "He might be on the road or trying to do so, but just ... in October, like I talked about earlier, he couldn't even use the word 'rape' more than one time. In this hearing ... he was finally able to use the word 'rape' and really be semi-honest as to what happened. So ... I don't think that he's recovered or reformed, because I think he was in denial just eight months ago, still 22 years later."

How She Became 'The Bun Lady'