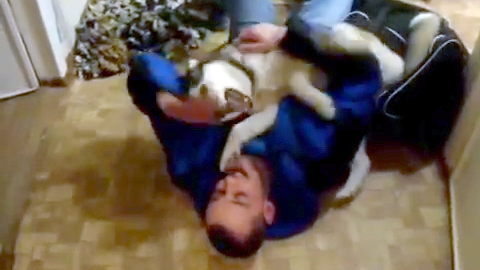 Some of the latest and greatest viral videos include a dog that is overjoyed to see its human return home and a wild emu that's looking for love in all the wrong places.

According to YouTube comments and Google Translate, the Husky puppy in this video posted by валерий иванов is named Perseus, and he hasn't seen his owner in one-and-a-half months. The man in the video is speaking Russian, but -- the beauty part is -- you don't need to be able to speak a word of the language to understand the affection these two share for each other.

Speaking of affection... this wild emu is after a bit of a different kind. It seems to have taken a fancy to Jeff, a backpacker from Missouri, who's lying on the ground for some unexplained reason. Jeff can't figure out how to get out of this situation, and his friend behind the camera, Joe Hughes, can't stop laughing long enough to help him out.