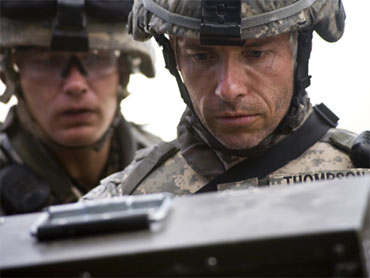 The movie, which won sterling reviews when it played in theaters during the summer, took the prizes for Best Feature and Best Ensemble. There also was a special tribute at the ceremony for its 58-year-old director.

"The Hurt Locker" stars Guy Pearce, Ralph Fiennes, Jeremy Renner, Anthony Mackie and Evangeline Lilly. A film festival darling, it has been generating Oscar buzz for a good part of the year.

In the Best Feature category, it bested other four other films: "A Serious Man," "The Maid," "Big Fan" and "Amreeka."

Catalina Saavedra, star of "The Maid," was named Breakthrough Actor and Robert Siegel won the Breakthrough Director award for "Big Fan." Robert Kenner's "Food, Inc.," which looks at the safety of the U.S. food supply, dominated by corporate interests, won the award for Best Documentary.
Ry Russo-Young's "You Won't Miss Me" was named Best Film Not Playing at a Theater Near You (read no distribution deal yet).

In addition to Bigelow, those winning the 2009 Gotham tributes were actress Natalie Portman, who stars in three different films this winter; veteran character actor Stanley Tucci and producers Tim Beavan and Eric Fellner.

The New York-based IFP, which was founded in 1979, honors low-budget independent art house films with its annual Gotham Awards.