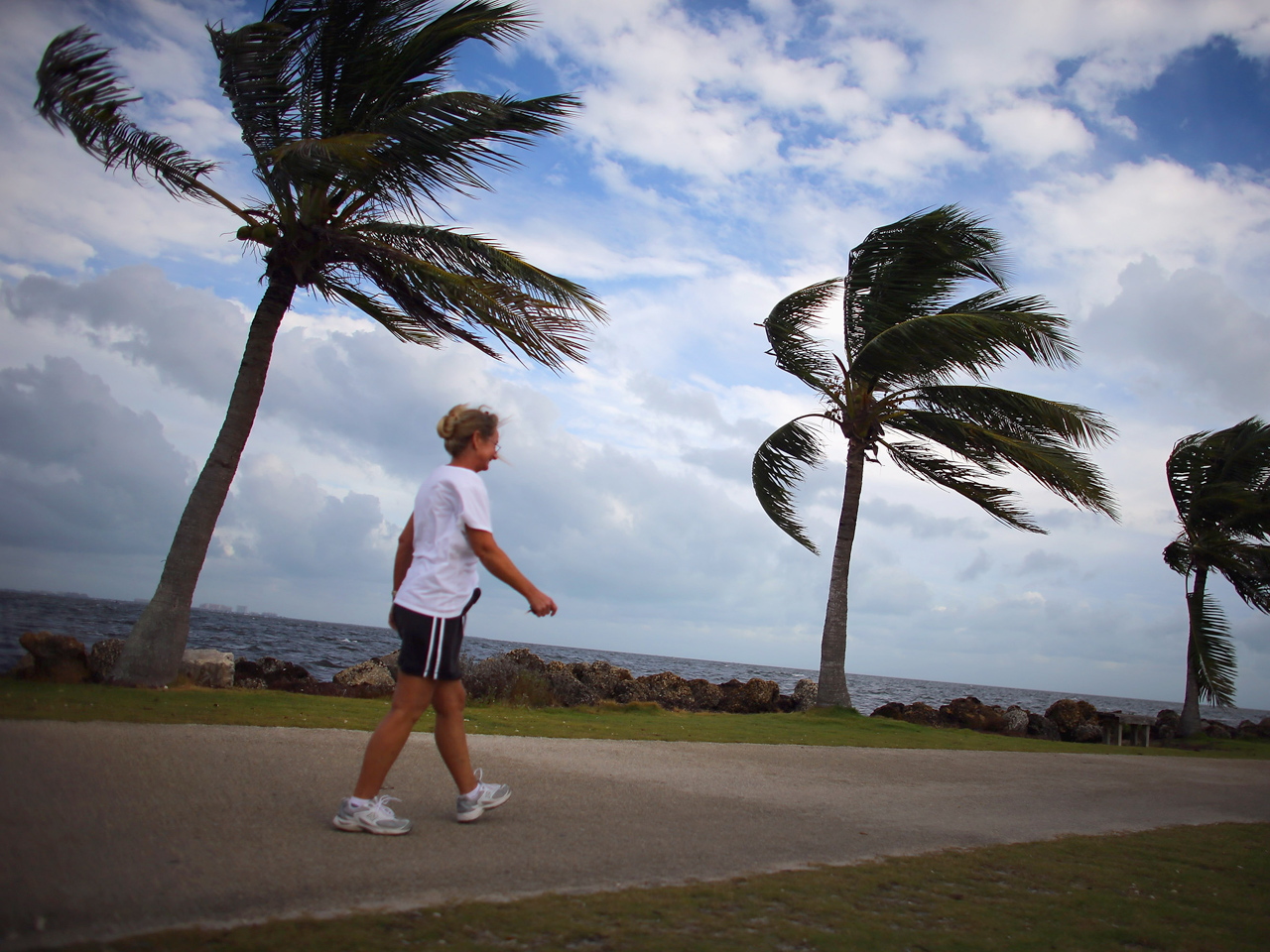 KINGSTON, Jamaica Hurricane Sandy's howling winds and pelting rains lashed precarious shantytowns, stranded travelers and downed power lines Wednesday as it roared across Jamaica on a course that would take it on to Cuba and then possibly threaten Florida and the Bahamas.

The National Hurricane Center reports that as of 8 p.m. ET, Sandy had maximum sustained winds of 85 mph, and was centered 115 miles southwest of Guantanamo Bay, Cuba. The storm is reportedly moving north at about 15 mph.

Sandy's death toll was at least two. An elderly man was killed in Jamaica when he was crushed by a boulder that rolled onto his clapboard house, police reported. Earlier Wednesday, a woman in Haiti was swept away by a rushing river she was trying to cross.

In some southern towns on Jamaica, a few crocodiles were caught in rushing floodwaters that carried them out of their homes in mangrove thickets, showing up in residential districts where electricity was knocked out, Jamaica's environmental agency said. One big croc took up temporary residence in a family's front yard in the city of Portmore.

By Wednesday evening the hurricane's eye had crossed Jamaica and emerged off its northern coast near the town of Port Antonio, meteorologists said, but rain and winds continued to pound the Caribbean island, which was dwarfed by the sprawling Sandy.

It was the first direct hit by the eye of a hurricane on Jamaica since Hurricane Gilbert 24 years ago, and fearful authorities closed the island's international airports and police ordered 48-hour curfews in major towns to keep people off the streets and deter looting. Cruise ships changed their itineraries to avoid the storm, which made landfall five miles (8 kilometers) east of the capital, Kingston.

Flash floods and mudslides were a threat for this debt-shackled tropical island of roughly 2.7 million inhabitants, which has a crumbling infrastructure and a number of sprawling shantytowns built on steep embankments and along gullies that sluice runoff water to the sea.

In the hilly community of Kintyre, on the outskirts of Kingston, Sharon Gayle and a few of her neighbors expected to completely lose the town's bridge over the Hope River, which washed away a section of the span just three weeks ago during a heavy downpour. The shell of a concrete home that collapsed into the river and killed two people several years ago still lies toppled on the sandy banks.

The 18th named storm of the Atlantic hurricane season was expected to pass over eastern Cuba early Thursday, missing the U.S. naval base at Guantanamo Bay, where pretrial hearings were being held for a suspect in the deadly 2000 attack on the destroyer USS Cole off Yemen.

Cuban authorities issued a hurricane watch for several provinces. A hurricane watch was issued for the central and northwestern Bahamas, where the storm was predicted to pass Thursday and Friday morning.

Forecasters at the U.S. National Hurricane Center in Miami said tropical storm conditions were possible along the southeastern Florida coast, the Upper Keys and Florida Bay by Friday morning. A tropical storm watch was in effect for the area, the center said.

In southwestern Haiti, a woman died in the town of Camp Perrin after she was swept away by a river she was trying to cross, said Marie Alta Jean-Baptiste, head of the country's civil protection office. There were reports of extensive damage to Port Salut on Haiti's far-southwestern coast after a river burst its banks. Mayor Larock Pierre Clervert said a hotel was destroyed by flood waters.

Across Jamaica, the poor in slums and moneyed residents in gated communities hunkered down at home as powerful winds shrieked around buildings and sent sheets of rain sideways.

Stranded business travelers and a smattering of locals rode out the Category 1 hurricane in hotels clustered along a strip in Kingston's financial district. Some read prayer books or novels, while others watched movies or communicated with loved ones on computers.

Cris Hopkinson, a Toronto woman who was on a business trip, said she hoped to catch a flight off the island Friday once the stormy weather cleared.

"For now, I'm just hoping that the glass in the windows doesn't shatter from the winds," Hopkinson said in the dining room of the Courtleigh Hotel.

About a mile away in the rough neighborhood of Grants Pen, where shops have been ransacked in the past during storms, a number of young men ignored the curfew, riding on bicycles or walking in small groups in the steady rain.

Cecile Graham, a mother of two teenagers, said she was worried about the possibility of burglaries or looting at the small markets and shops that line the main road.

"I hope that all the police are out and we won't have the looting that has taken place before," she said.

Police slowly drove through drenched communities in the coastal capital with their cruisers' lights flashing. A senior police superintendent was shot in troubled West Kingston, but the circumstances were murky.

The storm was predicted to drop as much as 12 inches of rain, especially over central and eastern parts of Jamaica, the country's meteorological service said. Some isolated spots could see as much as 20 inches, according to U.S. forecasters. Sea water washed over the streets of Port Royal, a depressed fishing village at the tip of a spit of land near Kingston's airport.

More than 100 fishermen were stranded in outlying Pedro Cays, a lobster- and conch-rich area about 40 miles (66 kilometers) off Jamaica's southern coast that was the first area of Jamaica to get Sandy's winds and rain. Some of them told local media they lacked fuel to get back to the mainland, but authorities said they willfully disobeyed an evacuation order.

On the mainland, over 1,000 people moved to shelters, but others living in low-lying areas on the mainland refused to evacuate their homes because they were fearful that their possessions would be stolen.

Airports in Kingston and Montego Bay shut down for the day and Royal Caribbean Cruises Ltd. announced that its Allure of the Seas megaship would not stop at Jamaica's northern Falmouth terminal on Wednesday, remaining at sea instead. Other cruise lines also rerouted ships from port calls to Montego Bay and Ocho Rios.

While Jamaica was ravaged by bands from Hurricane Ivan in 2004 and other powerful hurricanes centered offshore, the eye of a hurricane hasn't carved across the island since Gilbert in 1988, Jamaican meteorologist Jacqueline Spence said.

Far out in the Atlantic, Tropical Storm Tony posed no threat to land. The storm had maximum sustained winds of about 50 mph and was moving east-northeast at 25 mph. Its center was 1,060 miles west-southwest of the Azores.