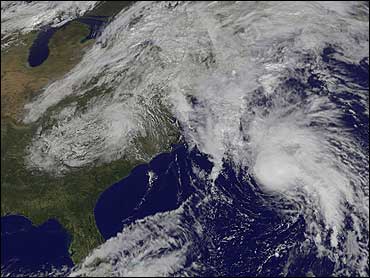 Authorities expect the state to see the worst late Sunday or early Monday, with wind gusts as high as 60 mph and waves of 15 to 20 feet, said Robert McAleer, Maine Emergency Management Agency director.

Authorities have advised Mainers living on coastal islands to evacuate if they depend on electricity for medical reasons, because ferry service will probably shut down Sunday, McAleer said. Significant power failures on the north coastal region of the state were also expected, he said.

He warned that coastal flooding could be a problem and said some hospitals in vulnerable areas had started sandbagging. Another major threat is small stream flooding, he said.

"We urge everyone to pay close attention to weather warnings and stay away from any flooded roadways or fast-running streams," he said.

It was Maine's first hurricane watch in 17 years, the National Weather Service said. Elsewhere in New England, a hurricane warning was posted for Nantucket Island off the coast of Massachusetts in September 1996, according to the Weather Service office in Taunton, Mass.

Two to 4 inches of rain had already fallen along some coastal areas by midday Saturday, and the storm was expected to deliver an additional 2 to 4 inches, said Eric Schwibs of the Weather Service in Gray.

At 8 p.m. EDT, Kyle was centered well off North Carolina, about 405 miles south of Nantucket, according to the National Hurricane Center in Miami.

The storm had top sustained winds near 75 mph and became a Category 1 hurricane Saturday afternoon. It was moving north over the open Atlantic at 24 mph. It was expected to strengthen slightly before weaking closer to Maine.

Kyle's center was forecast to be near eastern New England or the Canadian Maritime provinces late Sunday, the Hurricane Center said.

All told, weather watches or warnings stretched along the entirety of the Maine coast.

The Hurricane Center posted a hurricane watch from Stonington, at roughly the center of the Maine coast, to Eastport, on the border with the Canadian province of New Brunswick. A tropical storm warning extended from Port Clyde, about 50 miles northeast of Portland, to Eastport. A tropical storm watch extended from Port Clyde to Cape Elizabeth, an area that includes Portland, Maine's largest city.

The Weather Service also issued flood watches for the southern two-thirds of New Hampshire and southern Maine through Sunday evening.

That would put the storm's strongest wind in New Brunswick, rather than in Maine, which would get conditions more akin to "a garden variety nor'easter," Schwibs said.

The Coast Guard urged sailors to seek safe haven, saying the storm may hinder their ability to respond to emergencies.

The state Emergency Management Agency has deployed communication equipment to the area where the storm is most likely to make landfall, McAleer said. An emergency operations center is expected to be activated Sunday morning.