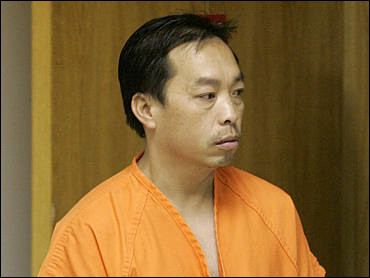 A Minnesota man accused of fatally shooting six deer hunters in the woods of northern Wisconsin appeared in a makeshift courtroom Tuesday a day after charges were filed against him.

During a brief five-minute hearing held in a basement classroom at the Sawyer County Sheriff's Department, Chai Vang, 36, of St. Paul, waived his right to a preliminary hearing within 10 days and one was set instead for Dec. 29.

CBS News Correspondent Drew Levinson reports it's a case that has emotions running high - so high that law enforcement officials said they
couldn't guarantee Vang's security if he was moved between jail and
the court house.

The hearing was held in a basement classroom because the sheriff could not make the courthouse secure without massive efforts, Judge Norman Yackel said.

The criminal complaint filed Monday said the hunters managed to shoot back once — maybe twice — after a confrontation about trespassing.

Two survivors told investigators no one in their group pointed a gun at the Hmong immigrant from Laos before he opened fire in an assault that had four of the victims shot in the back, according to the complaint.

He was charged in Sawyer County Circuit Court with six counts of first-degree intentional homicide, each carrying a life prison term, and two counts of attempted murder.

Defense attorney Steven Kohn said Vang was mentally competent to understand the charges against him and participate in proceedings in the case. Vang moved to the United States more than 20 years ago and is a naturalized citizen.

Yackel read the charges and asked Vang if he understood them.

"Yes," replied the handcuffed defendant, who was wearing an orange jail jump suit and shackles on his legs.

Vang told the judge he was not under the influence of drugs. Yackel also asked Vang about his education, and he said he gone to a two-year college.

Bond remained at $2.5 million, but Kohn said he reserved the right to address that issue later.

The defense attorney declined after the hearing to discuss the case or describe Vang's emotional state.

The criminal complaint said Vang, a deer hunter since 1992, told investigators the other hunters used racial slurs and profanity as they told him to leave, and they fired the first shot at him — suggesting he acted in self-defense.

The criminal complaint said Vang told investigators he fired 10 to 13 shots from his semiautomatic rifle, and the victims fired at him twice — including the first shot when he was walking away after being told he was trespassing on private land.

But two survivors, Terry Willers and Lauren Hesebeck, indicated only one shot was fired at Vang — by Hesebeck, who was already wounded, the complaint said. Hesebeck said he fired only after he was shot in the shoulder trying to dodge bullets fired by Vang. By then, he said, some of his friends lay mortally wounded on the ground.

Vang said at one point he saw one of the hunters still standing, yelled "You're not dead yet?", shot one more time and ran away down an ATV trail, the complaint said.

The criminal complaint indicates investigators found only one rifle at the scene of the killings.

Vang still had his empty rifle when he was arrested several hours after the shooting as another hunter helped him find his way out of the woods.

The Crotteaus, Laski and Jessica Willers were all shot in the back — the younger Crotteau, four times, the complaint said.

The final two funerals for the victims were held Monday, with family and friends paying tribute to Jessica Willers and Drew in separate services.

A week's passage did little to heal the community's wounds from the shootings, the Rev. Jim Powers said in his homily at Willers' service.

"Most of us are just as confused and lost and stunned as we were when we first heard about it," Powers told several hundred mourners. "We need to work through this and we need to help others work through it."

At a different church later Monday, mourners spilled out onto the steps outside to pay respects to Drew, a father of three who was raised on a dairy farm, served in the Army in Vietnam and returned to the area to raise his family.

Attorney General Peg Lautenschlager, whose office is prosecuting the case, refused Monday to address specific questions about it.

She also declined to say whether the state was looking into a possible connection between Vang and the unsolved killing of another hunter three years ago.

In that case, a 37-year-old Medford man was shot in the back twice as he hunted alone on family land about 80 miles from last week's shootings.