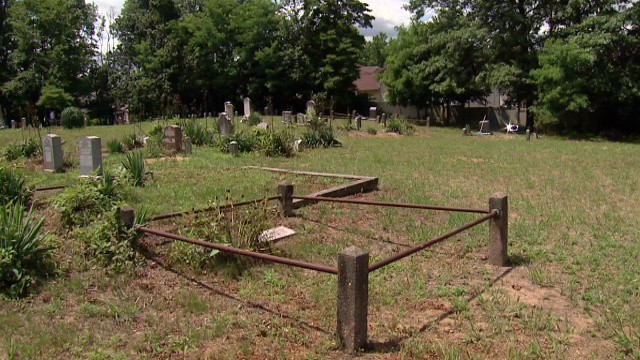 NEW YORK -- Specialists using ground-penetrating radar have detected hundreds of previously undiscovered gravesites in an African-American burial ground that dates to the 1830s.

Before the radar survey, there were 97 known burial sites, many marked by headstones, on the 1.6-acre burial ground. Conservancy President Peg Breen said another 576 were discovered by radar at an average depth of about 10 feet, bringing the number of total gravesites to 673.

"What we hope is that discovering the gravesites will bring the story of Sandy Ground back to life," Breen said. "The story is very little known and deserves to be told."

Sandy Ground, within walking distance of piers and docks, was settled by African-American oystermen escaping restrictive farming laws in the Chesapeake Bay. More than 150 families eventually moved there and prospered, owning their own homes, businesses and property. The current Zion Church, which dates to 1897, was a major stop on the Underground Railroad for escaped slaves.

By 1916, the oyster beds had become depleted and were closed. Fires in 1930 and 1963 destroyed much of the settlement.

The conservancy got involved in 1997, when vandals turned over some tombstones and the church turned to it for help. The church again went to the nonprofit about a year ago asking for help in developing a long-term maintenance and restoration plan for the cemetery.

"It's kind of daunting and amazing and exciting all at the same time because we had no idea that there were that many gravesites out there," said Pastor Janet Jones, of the Rossville A.M.E. Zion Church.

She said the church is looking at maybe trying to identify some of the unmarked graves and marking the grave locations in some way.

"It's a very important discovery, and only adds to the importance of caring for this cemetery, and having a wider reach of the story," Breen told New York's 1010 WINS Radio. "It was really a cultural and social center for blacks not just on Staten Island, but from towns in nearby New Jersey."

The city has two other important African-American historic sites: Weekville, another free-black settlement in Brooklyn, and the African Burial Ground, in lower Manhattan.