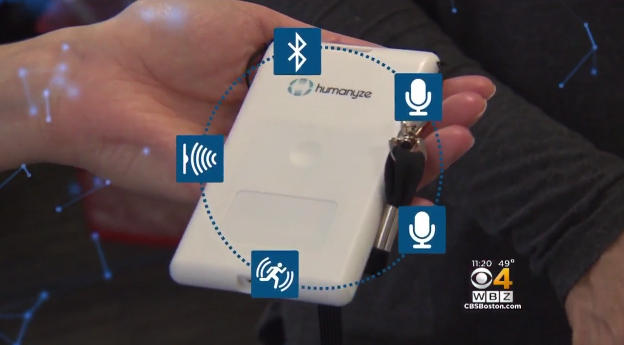 BOSTON — It could be the future of office life: high-tech tracking devices that can monitor your entire day on the job.

The Boston startup Humanyze wants to convince big business and employees that being watched can be a good thing, CBS Boston reports.

"It's sort of like a Fitbit for your career," Humanyze CEO Ben Waber said. And just like a Fitbit, it's with you all day long.

The same ID badge that opens office doors can now track your every move and more.

"We are essentially able to augment those ID badges to figure out in real time really what people are doing at work," Waber said.

The badges are outfitted with Bluetooth, infrared, a motion sensor, and two microphones. Waber told CBS Boston the microphones don't record what people are actually saying, just if they are communicating with a colleague. The technology is already being used at several big corporations.

It may seem like an invasion of privacy, but Waber says, "You are the only one who sees data about yourself."

The boss never sees data about one specific employee but instead sees data compiled into a series of graphs. The diagrams can detail if the sales team is collaborating with the engineering team, for example, or if groups of employees are spending too much time in meetings or too much time alone at their desks.

"The way this works is this is opt-in. We will never present individual data and if you don't want to participate you don't have to," Waber said. He said Humanyze won't do business with companies that don't let their own employees decide whether to participate.

Waber says this type of data-driven information is not only good for a company's bottom line but can also let businesses know if their policies are having an impact.

"Lots of companies are investing in diversity inclusion programs. But, no one knows if they actually work. For example, we know how many women are in a company," Waber said. "So, how much of the time are they invited to meetings? How much of their managers communicate with them? Really simple stuff."

Not all employees want to be watched over at work. CBS Boston reporter Kate Merrill talked with some local workers who were a bit apprehensive about tracking devices.

"It's a little disconcerting I think," one said.

"Employees, they don't want Big Brother looking at them," said another.

But like it or not, companies are already able to keep tabs on workers.

"Employers have always been able to monitor employees," said human resources consultant Elaine Varelas, Managing Partner at Keystone Partners. Through emails, phone calls, and time online, the boss can easily monitor how you spend your day at work.

The Humanyze badge aims to take monitoring beyond the individual level.

"It goes way past micro-managing an individual employee and it says 'How can, as an organization, we take a look at the things that our employees are currently doing?'" Varelas said.

"Right now, you can't follow people into the bathroom. That's clearly a minimal — but there should be more."

Too many selfies? You may have "selfitis"
View CBS News In
CBS News App Open
Chrome Safari Continue
Be the first to know
Get browser notifications for breaking news, live events, and exclusive reporting.