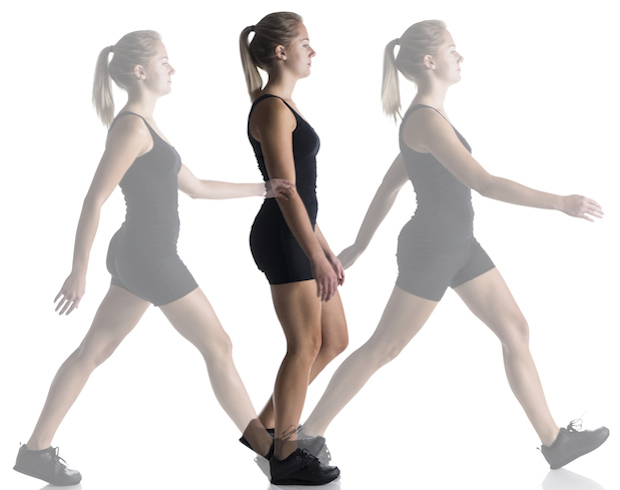 Learning to walk doesn't end in the toddler years -- it's a lifelong process of adjustment and an extension of human evolution. A new study suggests that one reason people continuously, if unconsciously, adjust the way they walk is because the body is wired to save energy.

The news is both good and bad for exercise. People who want to burn calories by walking, in an effort to lose weight, have to overcome the body's opposite goal of conserving energy. But for people who engage in long-term, competitive physical activity like marathons, hanging on to some extra calories can help increase endurance.

"Are you trying to lose a pound or win a race?" said Jessica Selinger, lead researcher and Ph.D. candidate in the Department of Biomedical Physiology and Kinesiology at Simon Fraser University in Canada. "You might wish that you were less efficient so that as you exercise, you're burning more calories per movement.... If you're running a really long running race, you want to be able to conserve some of that energy for the end of the race so that you can have that final push."

For people using pedometers or fitness trackers and walking or running on similar terrain everyday, this could mean the body is using fewer and fewer calories as it adjusts to routines.

The study, published Thursday in the journal Current Biology, asked people perform a series of walking tests while wearing a specially-designed robotic exoskeleton. First they asked the participants to walk normally for 12 minutes to assess their style and pattern of walking.

Then, they applied different levels of pressure using controls on the exoskeleton -- so slight that participants wouldn't consciously notice -- to see how they might adjust. The pressure, either subtly ratcheted higher resistance or a more relaxed lower resistance on their knees, made it slightly harder to walk with their normal gait.

They found that very quickly, the central nervous system learns a highly efficient pattern of movement to deal with the terrain while using as little energy as possible.

For another layer of complexity, to test whether the newly adjusted gait would be repeated later after other experiences and distractions, researchers set a ticking metronome to different speeds and asked the subjects to walk to those beats. And, even with the confusion of a metronome, as soon the distraction was removed, the subjects returned to using the new gait, or "preferred step frequency," within seconds, even if the energy saved was as low as five percent.

This energy "cost saving" happened so quickly, the researchers say it must have been an automatic response in the central nervous system.

"We can make conscious decisions to try to exercise more," said Selinger. "But what the finding really shows is that, behind the scenes there, sort of subconsciously, your nervous system still has this goal of trying to save you some energy."

"Where this study departs," she said, is "it's really the first to show we continuously sense and optimize cost in real-time."

Because the body is hard-wired to save energy by adjusting steps to new situations, weight loss exercise regimens and rehabilitation to help people regain their normal walking gait after a stroke, for example, might benefit from working more with the body than against it.

"Let's say someone has a stroke," said Selinger. "They're faced with new constraints when they're walking. Traditional rehab would say, they present with an asymmetrical gait and now we're trying to restore the symmetrical gait. But our results suggest that the asymmetrical gait that they've honed in on is actually the most energetically efficient way for them to move. We might need to look at some new or different approaches that might need to align the competing goal of our rehab therapies and the person's internal optimization goals."

This is early research into how the nervous system can command a person's steps. Researchers say they want to continue exploring where these triggers originate and how the systems of the body work in tandem to establish our walking patterns.