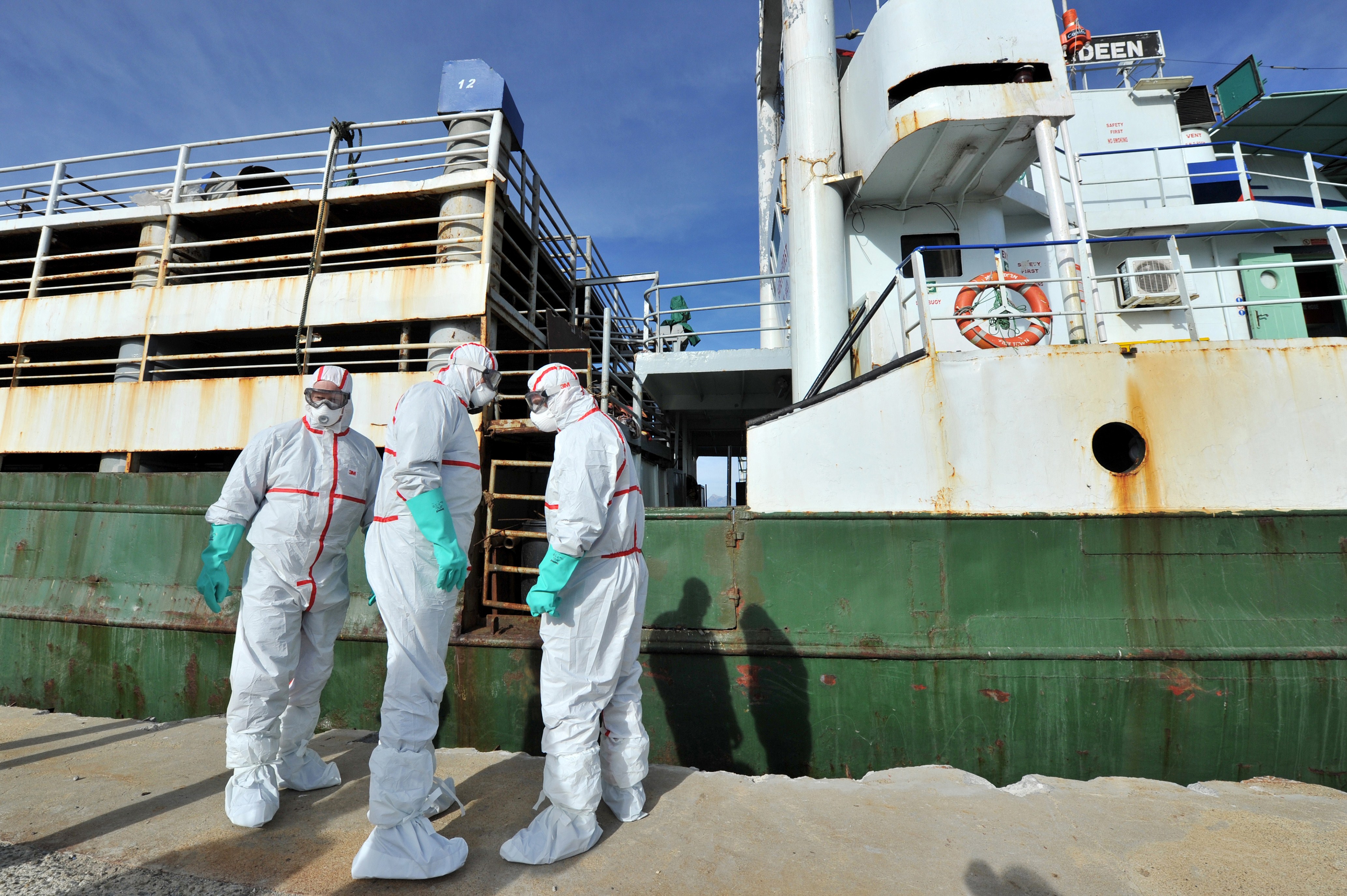 ABOARD THE COAST GUARD CUTTER TYR -- The crew was about to dig into dinner when word of the "ghost ship" came through: a freighter hurtling out of control toward Italy with no crew - and hundreds of Syrians as cargo.

The cattle freighter -- its animal pens crammed with families -- was on a collision course with the Italian coast, and the refugee who had phoned authorities from on board said the cabin's controls were jammed. The Tyr changed course and set off on a race against time.

The rescue operation by the Icelandic cutter Tyr was one of the most perilous in a string of high-seas dramas that point to a new modus operandi among smugglers who send migrants across the Mediterranean. Gangs buy scrapyard-bound cargo ships over the Internet and pack them with Syrians willing to pay top dollar to flee their ravaged homeland. The ships are then pointed toward Europe and abandoned, the migrants' fate hanging between shipwreck and rescue.

Until recently, most migrants paid several hundred dollars for a trip aboard an old fishing boat, dinghy or speedboat. Hundreds of men, women and children perish every year in those voyages when their unseaworthy vessels capsize in stormy seas.

The war in Syria, which has driven more than 3 million people into flight, has offered a new, lucrative opportunity for smugglers. Comparatively well-off refugees are able to pay higher prices for passage on bigger, safer ships from the far eastern Mediterranean directly to Italy, from where they then cross overland to central and northern European countries.

Many of those Syrians are willing to pay $4,000-$8,000 for a place on board a seaworthy cargo ship. For the gangs, that means that even if they lose a cargo ship that cost them a half-million dollars they can still earn millions of dollars in profit in a single trip.

Buying a cargo ship is a lot easier and cheaper than it used to be. A crisis in merchant shipping has left a glut of cargo ships on the market, with low demand depressing prices and making an aging vessel particularly affordable to criminal gangs, said a Greek merchant marine ministry official, who spoke on condition of anonymity because he was not authorized to speak on the record.

The EU border agency Frontex says about 15 cargo ships smuggling asylum-seekers have tried to reach Europe since August. Frontex spokeswoman Izabella Cooper said one vessel that arrived in Italy recently appeared to have been bought online from a scrapyard.

The cargo ship method is not likely to go away any time soon because of high demand. In Turkey alone, more than 1 million Syrians are fending for themselves without jobs or basic services - many of them doctors or lawyers who can afford to pay thousands of dollars for a cargo ship berth, said Metin Corabatir, who heads the Ankara-based Research Center on Asylum and Migration.

"We shall be seeing a lot more of these ships," Corabatir said. "These people have no future and often the only option they have is to leave. They will give everything that they have and risk their lives."

One of the smugglers' latest innovations is to select refugees with seafaring experience and put them in charge of the ship - offering them a steep discount in exchange for navigating. That means that the traffickers can remain safely ashore.

"There were no smugglers on board. There was no pilot on board. Even the crew, they weren't the crew," said Moutassem Yazbek, a Syrian who was rescued from a cargo ship by Frontex in December. "They were like me, refugees."

But when a cattle freighter named the Ezadeen put out a distress call on New Year's Eve, it didn't even have a makeshift crew of migrants.

The Icelandic cutter Tyr was 20 miles away. But when it reached the stricken ship just after dark, Capt. Halldor Nellett knew there was no way to board the Sierra Leone-flagged freighter. It was tearing along at a speed of 9 knots on choppy seas whipped up by gale-force winds - with nobody at the controls.

They contacted the ship by radio, and the woman who answered in English said she couldn't turn off the engines because the smugglers had wrecked the controls before leaving. The masked smugglers had locked the 359 migrants -- including 42 women and 62 children -- below deck in pens that looked like jail cells. They broke out once they realized the crew had abandoned them.

The Tyr shadowed the boat as it steamed closer to the Italian coast, powerless to stop it.

And then suddenly the Ezadeen's engines sputtered to a halt, and the ship went dark.

Robbed of momentum, the ship began listing in the high seas and the Icelanders sprang into action. Trained to rescue stricken fishing trawlers in the icy, storm-tossed waters of the north Atlantic, a four-man boarding team sped across the rough waters on the Tyr's launch to reach the freighter.

An Italian coast guard helicopter showed up, lowering several officers to try to restart the ship's engines, but it was no use -- the fuel tanks were dry.

On board, hundreds of desperate migrants clutched suitcases and pleaded to be taken off the dark, lurching freighter that had been their prison for days.

The Icelanders could provide water, food and medical care, but explained through English speakers in the crowd that there was no way they could ferry 300 people over to their ship across choppy seas at night.

They promised to get everyone to Italy, somehow. And they did: When morning came the weather cleared, and the ship was towed to Italy.

From there, they began a new adventure seeking family and friends in northern Europe.