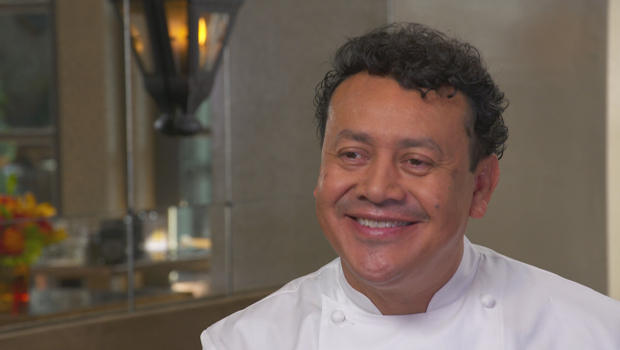 For Sunday brunch, it's hard to top this Houston hot spot, where the music is live, and the buffet line long. What's on the plate draws raves. But the real star is in the kitchen.

Meet Hugo Ortega, chef and owner of Hugo's, which has been serving authentic Mexican dishes in this city for 15 years.

While the food is impressive, Hugo's story is unforgettable.

"I was born in Mexico City," he said. "In Mexico, you're born poor and you die poor. You know, there is no other way around."

But for Ortega, there was.

In 1984, as a teenager, he hid in a freight train and crossed illegally into the U.S.

"So, when did you realize you'd made it?" asked Miller.

"When the train started moving. And then they told us, he say, 'You know, we're good. Now you can breathe'!"

Ortega went to Houston, working menial jobs during the day, and living on the streets at night.

Ortega, who became a legalized immigrant through President Ronald Reagan's amnesty program, heard about a job as a dishwasher at Backstreet Café. The bistro was owned by Tracy Vaught.

When asked what she saw in him to make her hire him on the spot, Vaught explained, "Well, he was very willing. He was young and strong and happy. And we needed a dishwasher."

He worked his way up at Backstreet, from dishwasher to busboy to grill cook. Vaught noticed and encouraged his talent. She told him he should go to cooking school.

And his response? "Yes!" he laughed.

It was an opportunity to bring his grandmother's traditional recipes from the mountains of Oaxaca, Mexico, to America.

Ortega became a chef. But what he wanted more than anything was to make Vaught his wife.

Miller asked him, "When did it become a love affair?"

"For me, it was from the first moment that I saw Tracy," he replied.

"My girlfriends thought I was crazy, crazy," Vaught said. "You know, it just developed from there."

"And he wouldn't be giving you moony eyes?" Miller asked.

"Right, or just distracting the staff."

The two have been married for 23 years. They have a daughter, Sophie, and between then, operate eight restaurants in Houston.

Former Mayor Anisse Parker says they are the city's culinary power couple. "Houstonians absolutely have this belief that we don't really care where you're from, we want to know what you can do. And Hugo's a great example of that," she said.

And in 1996, this once undocumented immigrant became a U.S. citizen.

Miller said, "This country sure has given you a lot."

This past spring, Hugo Ortega received the food industry's equivalent of the Oscar: The James Beard Award for Best Chef in the Southwest.

So if you stop by Hugo's and appreciate the food, just remember, it's the chef who will be grateful.

"America is the place to be," he said. "To make sure that your dreams come true, to dream of something wonderful."