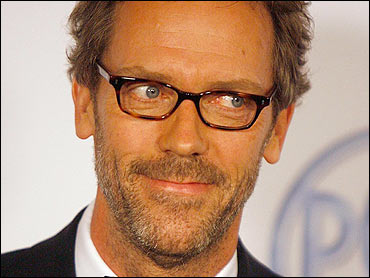 Hugh Laurie, who stars in the hit TV medical drama "House," was made a member of the Order of the British Empire on Wednesday. Queen Elizabeth II presented the honor to Laurie at Buckingham Palace.

The 47-year-old actor has been part of the comedy establishment in Britain for more than 20 years. He was a member of the Cambridge Footlights comedy group along with Emma Thompson and Stephen Fry.

Laurie and Fry landed their own sketch show, "A Bit of Fry and Laurie," in 1987. They also starred in "Jeeves and Wooster," a hugely popular TV version of P.G Wodehouse's comic stories.

He has won two Golden Globe awards for his role on "House" as the brilliant but flawed Dr. Gregory House, who heads a medical team specializing in the diagnosis of rare disorders.

He now spends most of his time in Los Angeles for his role on News Corp.'s Fox network show.