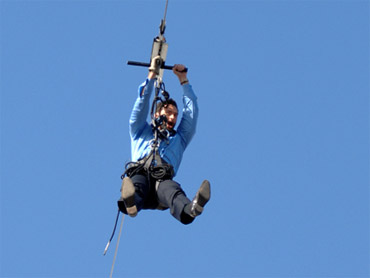 For a few hours, Sydney swapped opera for Oprah.

There were celebrities, giveaways and screams-a-plenty as 6,000 Oprah devotees jammed the steps of the landmark arts center in Australia's biggest city for the filming. The production marked the finale of her weeklong trip, accompanied by 302 U.S. audience members who took part in "Oprah's Ultimate Australian Adventure."

The show didn't go off entirely without a hitch; during the taping of the second episode, actor Hugh Jackman hurt his eye while rappelling from the top of the Opera House onto the stage. The Australian appeared to come in too fast, and smacked his face on some of the stage's scaffolding. Taping was briefly suspended while he was examined by paramedics and given a glass of red wine to sip, before getting the all-clear.

At the start, Winfrey's staffers whipped the already frenzied crowd into a tear-drenched state of hysteria before the host ascended the stage to the sounds of Men At Work's "Down Under," Australia's unofficial anthem.

"HELLOOOO AUSTRALIAAAAA!" she bellowed as the audience's roar reached a deafening pitch. "Now I understand why you call Australia 'Oz,' 'cause we truly are at the end of the yellow brick road!"

Winfrey launched her 25th and final season of "The Oprah Winfrey Show" in September by surprising her audience with her ultimate giveaway: an eight-day trip to Australia. For the past week, the lucky chosen have been traveling the continent - snorkeling the Great Barrier Reef, surfing at Sydney's famous Bondi Beach and exploring the rugged Outback.

Winfrey said she had long hoped to travel to Australia, and taking the audience with her made the experience even richer.

"Life is always better when you can share it," she said before the taping.

Four shows from Winfrey's Aussie adventure will screen in January and are expected to be watched by millions of people in 145 countries.

The state and federal governments have spent around $5 million on the trip, a price that has drawn criticism from some Australians. But officials and Winfrey herself insist the shows will bring many millions more in tourism publicity.

"It is immeasurable what four hours of a love festival about your country broadcast in 145 countries around the world can do," Winfrey told reporters.

And a love festival it was, with Winfrey lavishing praise on her Australian hosts, the scenery and the citizens.

"You're so darn friendly, you must go to friendly class!" she told the crowd, who were randomly selected from a pool of 350,000 hopefuls.

Her first guest was Australian actor Russell Crowe, who gave a nod to the surrounding sun-dappled harbor and said, "When you live in a city like this, it's not that hard to be friendly."

The nearby Harbour Bridge had been decorated with a giant "O" made of red lights - first illuminated during a fireworks display thrown in Winfrey's honor earlier in her trip.

"When we (saw) the fireworks and that 'O' came over the bridge, I went into the 'ugly cry,"' she told reporters. "That was a really amazing moment. I had an 'O' on the BRIDGE - on the Sydney Harbour Bridge!"

The family of the late "Crocodile Hunter" Steve Irwin also made an emotional appearance on the program. Daughter Bindi walked on stage with a python named "Olivia" draped around her shoulders, assuring Winfrey "She's really sweet!" as the host tentatively stroked the reptile.

Seven-year-old Robert Irwin told Winfrey he watches videos of his father - who was killed by a stingray barb in 2006 - every day.

"It's so good because it's like he's actually there," he said, reducing mother Terri Irwin and many in the crowd to tears.

"Living with Steve was like standing in a cyclone," Terri said, eyes watering. "Then we lost him. It was like the wind stopped."

Winfrey, famed for her giveaways, had plenty up her sleeve, including a $250,000 check for a cancer-stricken Australian man and his family, who have been struggling to pay their bills.

Hip hop artist Jay-Z, who also appeared on the show, stopped by a local boys' school after one of their teachers wrote to Winfrey and told her how much the students loved the rapper. The students, most of whom are from low-income families, were invited to watch the show's taping from inside the Opera House, and a live feed shown on the stage caught their reaction as Winfrey told them they would all be receiving free laptops.

"Now, no excuses not to do your homework!" Winfrey shouted as the students began leaping up and down, fists pumped in the air.

She didn't stop there. After the crowd had danced itself to exhaustion during Bon Jovi's performance of "Livin' On a Prayer," all 6,000 were informed they would be receiving a commemorative necklace made of native Australian pearls. (Cue the screaming.)

Winfrey said she plans to return to Australia, calling it a "magical, wondrous, wondrous place."

"It has been an experience unparalleled," she told reporters. "I will be back. And when I come back, you won't know it. I'm going to sneak in next time."