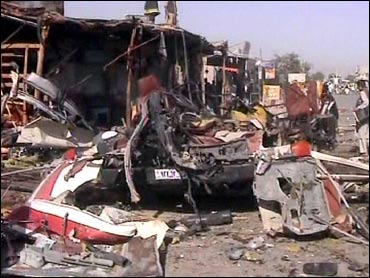 More than 10,000 Afghan and coalition forces have begun a massive anti-Taliban operation across southern Afghanistan, the largest offensive since the 2001 invasion that toppled the former regime, according to the U.S. military.

As the offensive began, suspected militants continued their attacks against the coalition.

The military offensive, dubbed "Operation Mountain Thrust," is part of a major push to squeeze Taliban fighters responsible for a spate of ambushes and suicide attacks against coalition forces and Afghan authorities in recent months.

The operation was also timed to coincide with the upcoming transfer this summer of command in the south from the U.S.-led coalition to the NATO-led International Security Assistance Force.

"There is no scheduled end date to Mountain Thrust. The Coalition will continue operations well into the summer and until objectives are met," the statement said.

The offensive is focused on southern Uruzgan and northeastern Helmand provinces, where the military says most of the militant forces have gathered. Operations also will be conducted in the former Taliban stronghold of Kandahar and Zabul.

Troops on Wednesday built sand barriers and guard outposts around a small forward operating base in the Helmand district of Musa Qala, while others fired rounds from 119-millimeter howitzers deployed to the base's perimeter into the vast desert expanse.

"We do it so they know it's here and they know it could be pretty bad for them," said Lt. Col. Chris Toner, commanding officer at the base located 180 miles from the nearest permanent base in Kandahar. "This terrain up here favors the defender. I'm sure they know how many vehicles we have here, that we have artillery here, but that's OK - I know what they know."

Limited operations began May 15 with attacks on Taliban command and control and support networks. According to U.S. military and Afghan figures, about 550 people, mostly militants, have been killed since mid-May, along with at least nine coalition troops.

The operation is the largest launched since 2001. But U.S.-led troops have conducted large-scale operations elsewhere in Afghanistan involving several thousand soldiers, particularly in the east near the Pakistani border where Taliban forces routinely attack U.S.-led troops from towering mountain ranges.

Afghanistan has been wracked by its bloodiest violence since the U.S.-led coalition invaded after the Sept. 11 terrorist attacks and toppled the Taliban government for harboring Osama bin Laden and his al Qaeda supporters.