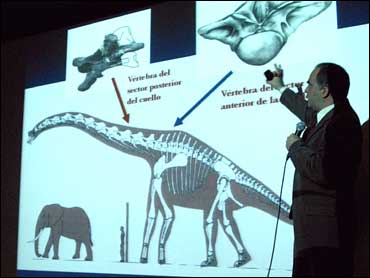 The skeleton of what's believed to be a new dinosaur species - a 105-foot plant-eater that is among the largest dinosaurs ever found - has been uncovered in Argentina, scientists said Monday.

Scientists from Argentina and Brazil said the Patagonian dinosaur appears to represent a previously unknown species of Titanosaur because of the unique structure of its neck. They named it Futalognkosaurus dukei after the Mapuche Indian words for "giant" and "chief," and for Duke Energy Argentina, which helped fund the skeleton's excavation.

"This is one of the biggest in the world and one of the most complete of these giants that exist," said Jorge Calvo, director of paleontology center of National University of Comahue, Argentina, lead author of a study on the dinosaur published in the peer-reviewed Annals of the Brazilian Academy of Sciences.

Scientists said the giant herbivore walked the Earth some 88 million years ago, during the late Cretaceous period.

Since the first bones were found on the banks of Lake Barreales in the Argentine province of Neuquen in 2000, paleontologists have dug up the dinosaur's neck, back region, hips and the first vertebra of its tail.

"I'm pretty certain it's a new species," agreed Peter Mackovicky, associate curator for dinosaurs at Chicago's Field Museum, who was not involved with the discovery. "I've seen some of the remains of Futalognkosaurus and it is truly gigantic."

Calvo said the neck alone must have been 56 feet long, and by studying the vertebrae, they figured the tail probably measured 49 feet. The dinosaur reached over 43 feet tall, and the excavated spinal column alone weighed about 9 tons when excavated.

Patagonia also was home to the other two largest dinosaur skeletons found to date - Argentinosaurus, at around 115 feet long, and Puertasaurus reuili, between 115 and 131 feet long.

Comparison between the three herbivores, however, is difficult because scientists have only found few vertebrae of Puertasaurus and while the skeleton of Futalognkosaurus is fairly complete, scientists have not uncovered any bones from its limbs.

North America's dinosaurs don't even compare, Mackovicky added in a phone interview. "Dinosaurs do get big here, but nothing near the proportions we see in South America."

The site where Futalognkosaurus was found has been a bonanza for paleontologists, yielding more than 1,000 specimens, including 240 fossil plants, 300 teeth and the remains of several other dinosaurs.

"As far as I know, there is no other place in the world where there is such a large and diverse quantity of fossils in such small area. That is truly unique," said Alexander Kellner, a researcher with the Brazilian National Museum and co-author of the dinosaur's scientific description.