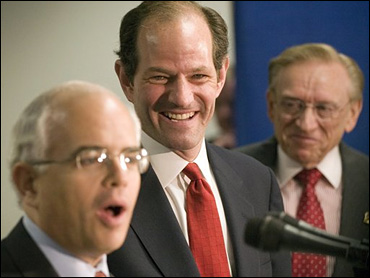 Ending years of legal wrangling over the multibillion-dollar insurance policy on the World Trade Center, the state and seven insurers have reached a settlement that secures more than $4.5 billion in funding to rebuild ground zero.

About $2.55 billion has already been paid out by two dozen insurers since the Sept. 11, 2001, attacks that destroyed the twin towers. The remaining insurers agreed to pay $2 billion and drop several court battles over how much they owe in insurance to replace the trade center.

The insurers and builders of the trade center site credited state Insurance Superintendent Eric Dinallo and Gov. Eliot Spitzer for hammering out a deal over two months in a dispute that had cost millions in attorneys' fees for years.

Officials say the deal was reached at 5:30 a.m. Wednesday in Dinallo's offices, after more than 20 hours of negotiations with the insurers, trade center developer Larry Silverstein and a retired judge who acted as a mediator. Spitzer called into the meeting Tuesday afternoon.

Spitzer called the insurance dispute "the last major barrier to rebuilding" the site's office and retail space and said that the agreement was "an unbelievable recovery" of insurance dollars.

"I'm most proud of an industry that stepped up," said Dinallo. "The rebuilding would not be possible without the insurers."

The money - being used by Silverstein and the site's owner, the Port Authority of New York and New Jersey, to build five new office towers at ground zero - is slightly less than an award given to Silverstein after a 2004 trial.

Silverstein, who leased the twin towers weeks before they collapsed, had $3.5 billion worth of insurance on the trade center. He went to court after the attacks, arguing that he should receive two payouts because the two hijacked planes that crashed into the towers represented two attacks instead of one.

The developer was awarded $4.6 billion in 2004; two juries decided that some of the insurers had to pay twice the policy because the companies' different insurance policies carried different wording about what would constitute multiple events.

The money represents about half of the funding needed to rebuild the trade center site. Silverstein was originally responsible for rebuilding five office towers, but a year ago agreed to split the rebuilding - and the insurance money - with the Port Authority, which will build the 1,776-foot Freedom Tower and another planned tower.

The Port Authority and Silverstein this year sued several insurers who refused to recognize the agreement.

Wednesday's agreement ends all court cases; under the agreement, the insurers will not disclose exactly how much each company will pay of the remaining $2 billion. Most of the money will be paid to both Silverstein and the Port Authority over the next 30 days.

Silverstein thanked Spitzer and Dinallo for their intervention and said rebuilding would no longer face any financial obstacles.

"This train is now on the tracks," Silverstein said. "The World Trade Center is on its way to being rebuilt."

An Allianz official, Andreas Shell, said the company is pleased that the trade center case is over and called it one of the most complex and largest insurance cases ever.

"We are looking forward to putting all of this behind us," he said.`
By Amy Westfeldt