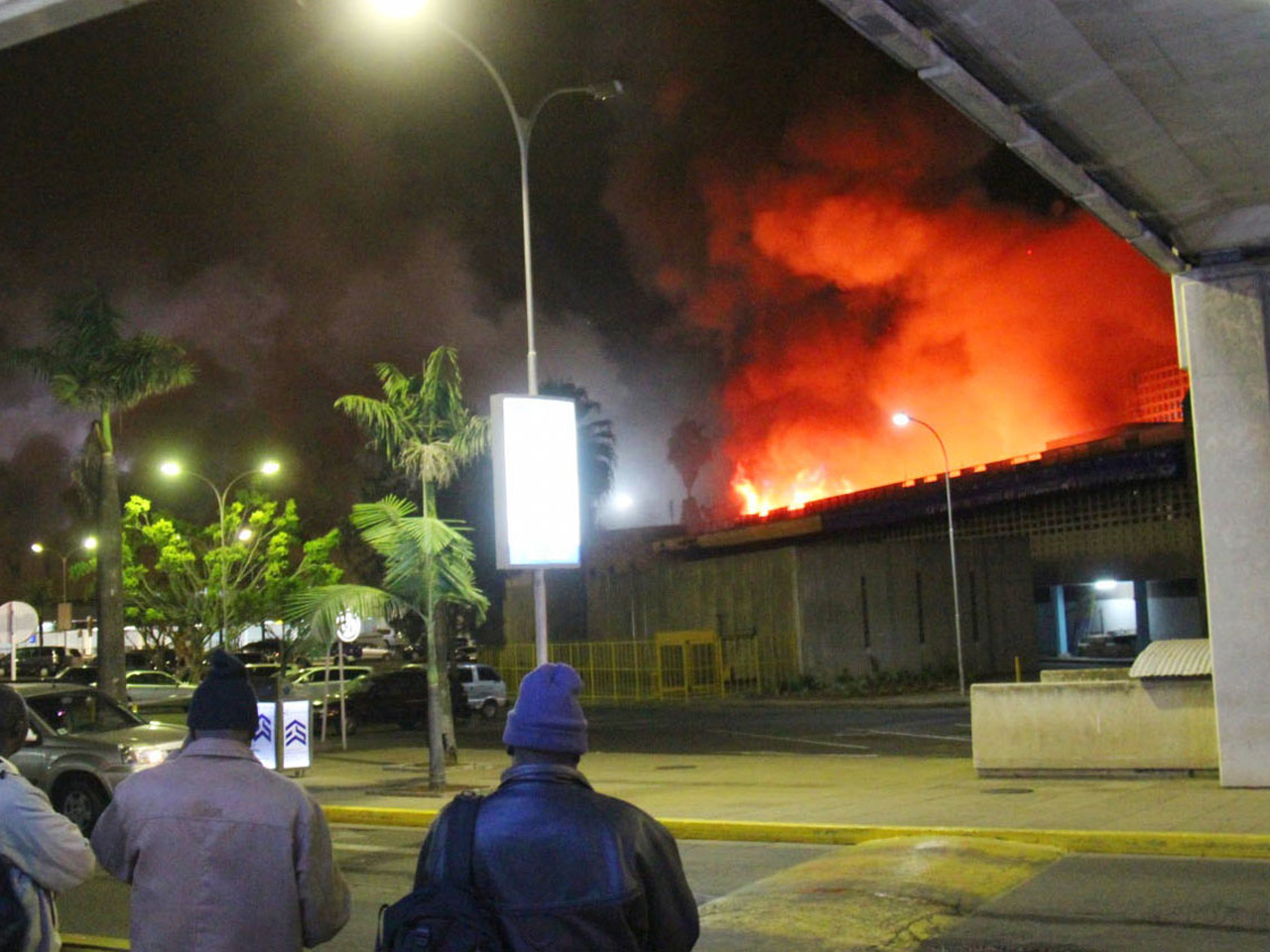 No injuries were reported, said Michael Kamau, the cabinet secretary for transport and infrastructure.

Dark black smoke that shot skyward was visible across much of Nairobi as emergency teams battled the blaze. Passengers reported a slow response by the under-resourced fire brigade, and the blaze raged for four hours before being contained.

The fire broke out on the 15th anniversary of the U.S. Embassy bombings in Nairobi and neighboring Dar es Salaam, Tanzania, but there were no immediate signs of terrorism. Kenya's anti-terror police boss, Boniface Mwaniki, told The Associated Press he was waiting for the fire to be put out so that he could inspect the scene before making a judgment.

"It was huge, the smoke billowing, and it didn't seem to be stopping," said Barry Fisher, who had hoped to fly to Ethiopia on Wednesday morning.

Kamau said the fire began at 5 a.m. in the immigration section of the arrivals hall. Inbound flights were diverted to the coastal city of Mombasa.

As in many countries in East Africa, public sector services like police and fire units are hobbled by small budgets and outdated or no equipment. Many of the responding units to Wednesday's fire were from private security firms.

A British passenger, Martyn Collbeck, said he was surprised that the airport wasn't shut sooner so emergency vehicles could respond.

"When I arrived, there were one or two fire engines parked outside the international arrivals. It spread very fast," said Collbeck, who had been scheduled to fly back to London on an early morning KLM flight. "There were a couple of explosions which I think were a couple of gas canisters."

"I would have expected more fire engines to respond faster," he added.

There may not have been fire engines available to respond. The country's largest newspaper, The Daily Nation, reported last month that Nairobi County doesn't have a single working fire engine, and that three fire engines were auctioned off in 2009 because the county hadn't paid a $1,000 repair bill.

"It is a disgrace of biblical proportions that the entire Nairobi County does not have a public fire engine in working condition," the paper wrote in an editorial last month. "When (government leaders) were debating their budgets, they did not deem it fit to set aside money either to buy new ones or repair the old ones. But they did set aside money to build mansions for governors, (buy) big vehicles for county executives and other needs without a direct benefit to Kenyans."

The paper said the collapse of the fire department means responses to disasters is in the hands of private companies and the military.

The Nairobi airport is the busiest airport in East Africa, and its closure is likely to affect flights throughout the region.

Fisher, a trade specialist who lives in Nairobi, described the scene as chaotic.