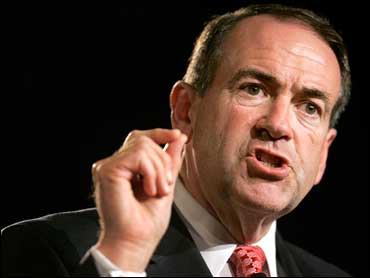 The former Arkansas governor drafted the letter following comments Thompson made on the Fox News Channel. Thompson criticized the current process of presidential primary debates for not being "designed to illuminate people's thoughts, feelings."

"I kind of think that Newt's idea of going back to a Lincoln-Douglas debate type format where you have two people sit down or stand up ... and discuss one particular topic in depth, and go back and forth about it," the former Tennessee senator said, referring to a proposal by former Speaker of the House Newt Gingrich.

"I share your view of the debates and agree that Newt's 'Nine Nineties in Nine' concept is a far better way to make sure America's next President has the character and capacity to lead our nation forward, that's why I have already signed that pledge," Huckabee wrote in his letter to Thompson. "I agree that what is needed is a real discussion by the candidates about their vision for the future of our country."

Huckabee, a Baptist minister, said an in-depth discussion on topics such as health care, education, energy independence, terrorism and national security would help the public decide which "candidate has the right vision for America's future."

In an interview with CBS News following his address at the AARP convention in Boston, Huckabee said, "I'd be more than happy to accept his offer. I'd love to be in a debate like that and I'm hoping that he'll let me know when and where." Huckabee suggested that the first debate be in New Hampshire.

Asked if he thought he would win, Huckabee said, "I don't know, but I think the American people will win if we have that kind of discussion where we really spend that kind of time in depth on issues."
Joy Lin