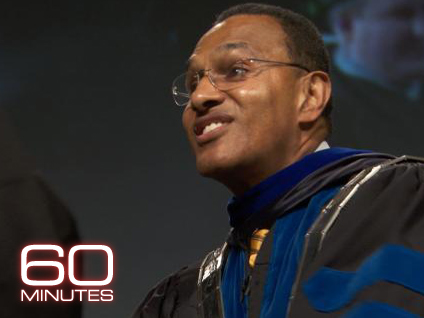 Freeman Hrabowski, president of the University of Maryland Baltimore County, has an unusual name - and an even more unusual approach to education. His "Meyerhoff Scholars," for instance, are expected to adhere to a rigorous schedule and strict rules designed to instill discipline and build community. As Byron Pitts reports, what was once a little known commuter school is now graduating outstanding scientists and engineers, many of whom are minorities.

The following is a script of "Freeman Hrabowski" which aired on Nov. 13, 2011. Byron Pitts is correspondent, David Schneider, producer.

We met a man with an unusual name you've probably never heard of, but his message about education and America's future is something we thought you should know.

Hrabowski is president of the University of Maryland Baltimore County. UMBC, as it's called, was once known primarily as a commuter school. Today, this mid-sized state university has earned a reputation as one of the most innovative schools in the country. Especially when it comes to getting students into math and science and keeping them there.

How Freeman Hrabowski got to UMBC is a journey through American history. And there's a story in his name.

Byron Pitts: I'm not sure how to phrase this in a delicate way, but how does a black man get a name like Hrabowski?

Freeman Hrabowski: Well, you're asking the question that most people just look at me and think and they don't know how to ask it. My grandfather's grandfather was the Polish slave master in rural Alabama.

Hrabowski: And Freeman, I am the third, Freeman Hrabowski the third. And my grandfather was the first one born a free man as opposed to having to be freed.

Freeman Hrabowski was an only child. His parents were both educators.

He grew up in Birmingham, Alabama when segregation was law and the civil rights movement was growing.

[CBS News file footage: This is Birmingham, the South's mightiest industrial city as the world knew it this week.]

In May 1963, Hrabowski was in the "Children's March," organized by Martin Luther King, Jr. - a march made infamous when Sheriff Eugene "Bull" Connor unleashed dogs and fire hoses on the demonstrators. In the midst of it was twelve-year-old Freeman Hrabowski, who had his own encounter with Bull Connor.

Hrabowski: He asked me, 'What do you want, little Negro?' I was so scared. And-- big guy. And I said, 'We want to kneel and pray.' All we wanted to do was to kneel and pray for our freedom. And he picked me up, he spat in my face and threw me into the paddy wagon.

Pitts: He spit on you?

Hrabowski: He did, indeed. He did, indeed. It was an awful experience and it took years for me to get over that. It taught me that even kids can make decisions that can have an impact on the rest of their lives. And it also taught me the importance of getting support from each other in that experience. It was frightening. I was there five days.

Pitts: In jail for five days?

Hrabowski: In jail for five days. It was awful. And yet, it was rich.

Hrabowski excelled in school. At age 12, he was in the ninth grade. At 15, he went to college, where he studied math and began a career devoted to higher education. Since 1992, he's been president of UMBC - a state university on the outskirts of Baltimore.

[Hrabowski: We want people to take ownership at UMBC.]

He uses the lessons from that Birmingham jail...of the importance of commitment and support from others...as he leads the university today.

Hrabowski: There's this balance between being nurturing and supportive here at UMBC, but also about setting very high standards. We are preparing students to compete against and work with people from all over the world.

Hrabowski: We have to teach Americans of all races, from all backgrounds, what it takes to be the best. And at the heart of it is the same thing we saw when we were kids. Hard work. Nothing-- I don't care how smart you are. Nothing takes the place of hard work.

Much of the hard work at UMBC is in science, engineering and math which accounted for 41 percent of the bachelor's degrees earned there last year - well above the national average of 25 percent. Nationwide, most college students who start off in the sciences either change to a different major or don't graduate. UMBC keeps undergrads engaged by including them in research typically left to graduate students. These students are investigating the secrets of HIV.

Hrabowski: We need hands on experiences. We need to be encouraging that curiosity. And people cannot-- should not be allowed simply to sit back and be bored.

Students can also get jobs and internships at one of 76 companies located on campus. Most are technology startups. They get help growing their businesses and tax credits, along with access to students and faculty. One thing you won't find at UMBC...

Pitts: You had a chance to get a football team at UMBC, right? And you said no?

Hrabowski: People talk about that. Right. I mean, well-- well, first of all, it takes a lot of money for a football team to win.

Francois Rice: It seems like everything's flipped. Where, you might go to another university and the football team might be top dog. Here, it's the chess team that's top dog. And it's--

Rice: Yeah, it's cool to be smart.

Rice is part of the 23rd incoming class of Meyerhoff Scholars - a program that recruits high achievers in math, science and engineering who are aiming for graduate degrees and careers in research.

Hrabowski: It is that we can create a program that focuses on both excellence and inclusiveness, starting with African Americans and then Hispanics and now whites and Asians, students of all races, who are excellent in science and engineering. We need people from all backgrounds. And Meyerhoff says, 'It can be done.'

The program started in 1988 when Hrabowski teamed up with billionaire philanthropist Robert Meyerhoff. Both men worried that African American males were shut out from careers in the sciences from lack of opportunity, not talent. Over the years, the program expanded to all students and helped put UMBC - and Hrabowski - on the map of higher education.

Rahel Zeman: I love sciences, math are definitely my passions. There's, like, so many--

Pitts: You're passionate about math and science?

Rahel Zeman, Debra Silver and Eleban Ortiz are all interested in medical research. Michael Roberts and Francois Rice want to be mechanical engineers.

[Teacher: Time's up. Put your bags down.]

To get them jumpstarted, UMBC runs a summer boot camp for the new Meyerhoff Scholars with surprising rules for such a high-tech generation.

Zeman: No cell phones, no laptop, no Facebook, no electronics.

Zeman: There's just so many, but the point is, they want us to be socializing and form real bonds and relationships with each other.

[Student: It requires energy to dissolve.]

For six weeks, they work hard, but the most important lesson they get is how to work together. The key to success - they're told - is collaboration, not competition. To reinforce the idea, the 72 young scholars are required to learn together, study together, live together and move around campus together - literally. Gaps in the line are not allowed.

Eleban Ortiz: You could be worried, you know, 'Oh, I might not make it,' or stuff. But then, there's the 72 people right around you saying that you can do it.

Zeman: We have 72 of us that we can ask, 72 teachers all around us. It just makes such a difference that I love.

Pitts: Seventy-two teachers, that's how you describe your classmates--

Zeman: Definitely, definitely. 'Cause I can safely say that we can all learn from each other and teach each other.

Hrabowski: We make this assumption that either math and science are for you or they're not. You know, I get goose bumps doing math. I always have.

Hrabowski: Goose bumps. I always have. Students laugh at me, but my students get goose bumps doing math and science. We love it.

Kafui Dzirasa: He always tells this story about, you know, 19 years old and graduated from college and how he used to get goose bumps doing math problems. And all I can remember as a 17-year-old thinking to myself was, 'I never wanna be like that.'

Pitts: Anybody but that guy.

Kafui Dzirasa loved to take apart computers as a kid, and says he breezed through high school without too much effort. He went to UMBC as a Meyerhoff Scholar in 1997 thinking about his next track meet, not a career in science.

Dzirasa: When I got to UMBC I had no idea what research was. In fact, for about the first eight months I lied about wanting a Ph.D. 'Cause I didn't know what a Ph.D. was.

Today, Dr. Dzirasa has both a Ph.D. in engineering and a medical degree. He heads up a research team at Duke University, studying the brain and mental illness.

Dzirasa: I seek to understand the range of human suffering that comes in the context of psychiatric illness.

[Dzirasa: And this is what the brain cell activity looks like...]

Dzirasa says the problems are too complex for one scientist to solve alone. That means the first critical step to success in his lab - and most other labs, he says - is building the right team.

Pitts: And you learned all that at UMBC, that-- that framework of the kinds of skills you need?

Dzirasa: Yeah. Yeah. I think-- and I think that that was the most beneficial thing that I got out of UMBC. Believing in myself as a scientist and learning how to work with others, how to think deeply, how to seek people who were great in other areas without being intimidated in that and build teams to solve problems together.

So far, 813 students have come out of the Meyerhoff Scholars Program and nearly 90 percent of them have gone on to graduate school.

Hrabowski worries, though, that the U.S. is not doing enough to create more homegrown scientists.

Hrabowski: Most people don't realize that only about 10 percent of Americans in 1965 had a college education.

Hrabowski: And today we're up to about 25 percent.

He says the difference is that 50 years ago, most jobs didn't require a college degree.

[Hrabowski: So what do you want to do when you graduate?

Student: I'm gonna be a teacher.

Around campus, Hrabowski is a familiar sight full of encouragement and contagious enthusiasm.

[Student: It's fun, I like that class a lot.

Pitts: But aren't you just romanticizing the possibilities. 'Cause there are many kids who just won't make it, because they won't do the work or they're not bright enough to be there and be successful.

Hrabowski: But, so, do you just say, 'Well, those who were already ready to-- to study hard, they'll make it and let the rest fail?' I think that's not what an educator should do.

[Hrabowski: I want you to keep dreaming about the possibilities. Nothing takes the place of hard work, attitude and getting support from each other. And that's what-- that's what this is all about. Focus, focus, focus. Give yourselves a hand. Keep working hard.]