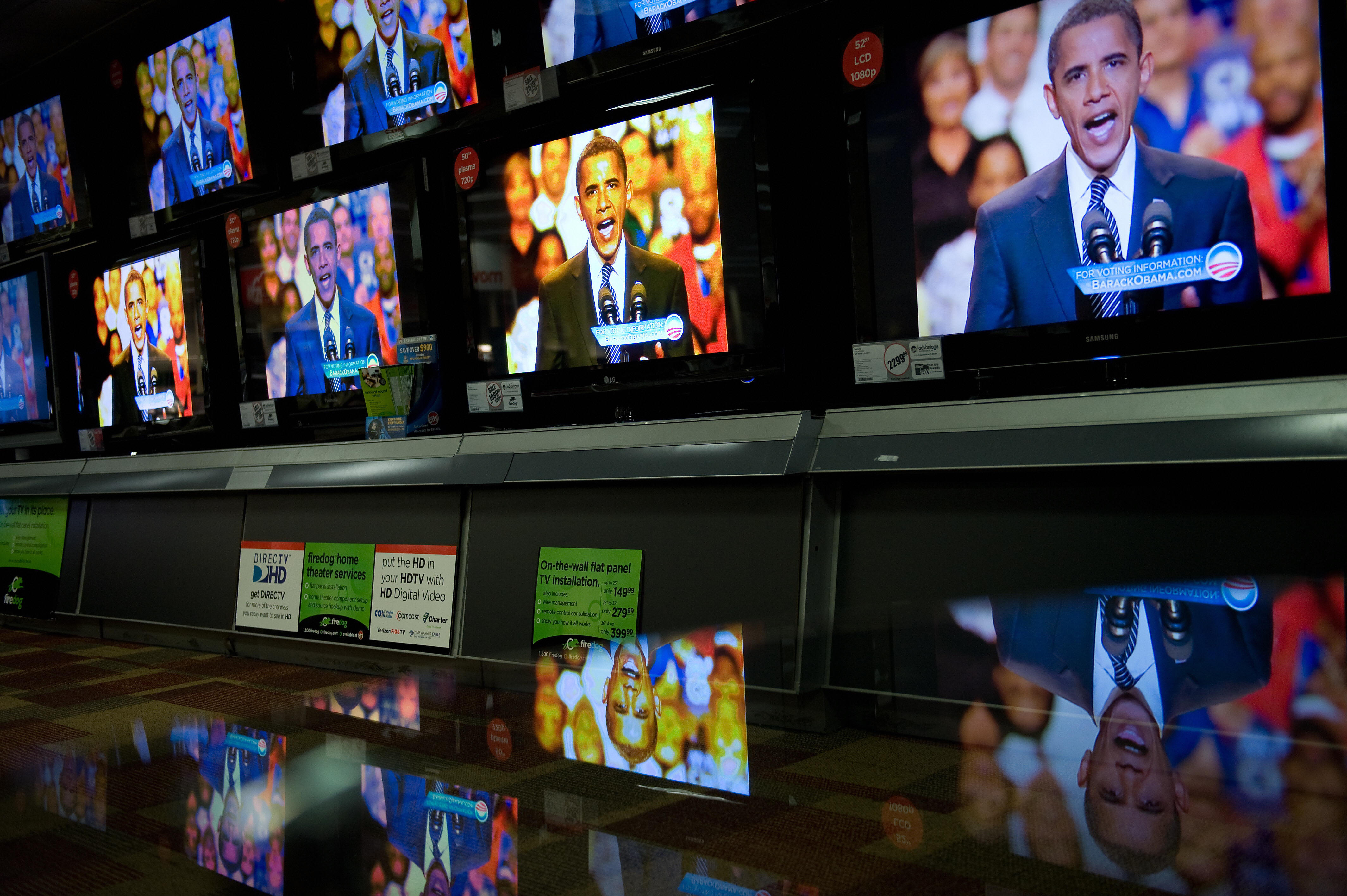 As I watched the big television screen broadcasting the focus group taking place in Charlotte, N.C., I was tempted to tweet about it. This is the modern instinct. I don't just mean for reporters. Everyone seems to have a couple of screens open all the time.

March Madness is about to begin, and Twitter will be stuffed full of contemporaneous commentary about the games being played. This was the topic of the focus group--the changing way we all use technology. The moment I opened TweetDeck, the focus group moderator was going around the conference room table asking earnest participants whether they had ever used Twitter while they were watching something else. Had I tweeted about that question, it would have been a tweet written while watching someone televised talking about tweeting while watching other media. A meta-turducken. If I had taken a selfie while doing it, I might have won some kind of MacArthur genius award.

The Tuesday evening focus group was one of two held as a part of the Off the Grid National Survey, a poll conducted by Public Opinion Strategies and Global Strategy Group to examine the way people consume information. If you're reading this online--and of course you are--the findings will seem familiar because you're undoubtedly one of the people the survey found who are moving away from traditional live television viewing. Instead, you are using technology to determine when and how you watch media--streaming, DVR, YouTube--and to seek out information about what you're watching--ordering P90X on your iPhone the minute you see those rock-hard abs.

For political campaigns this means it is getting harder to reach voters through political advertising, which for the last 50 years has been the key tactic campaigns have used to communicate. Candidates are going to have to find people in the new spaces where they now live. That poses a challenge for political reporters, too. People are empowered by their tablets and smartphones, but when they look for information about politics, they aren't rushing to media--traditional or otherwise--because they don't trust us.

This is the third Off the Grid survey in the last four years, and for the first time, only a minority of respondents (48 percent) say that live television is their primary source for watching video content. For campaigns, live television viewership is a key measurement because that's when people are more captive to ads. The second preferred method of viewing, according to the survey, is watching pre-recorded television. When participants in the focus groups in Charlotte and Des Moines, Iowa, were asked if they skipped past the ads when watching on DVR, they all said yes.

People watch on their own terms. "Whatever I want is at my fingertips whenever I want to have it," said one man describing how technology had become a part of his life since he was 18. In June 2012, 17 percent said they had watched streaming through a television in the past week; now 27 percent do. The same jump has taken place in smartphone and tablet use.

If people are watching live television (most often sports and news, according to focus group participants), they are doing it while also doing something else on one of their other devices. Forty-one percent of respondents in the poll said they regularly or occasionally used another device while watching television.

So what does this mean for political advertisers? It could mean campaigns have to make ads louder and meaner and cleverer to get people to look up from their smartphones where they've tuned out while the ads that they hate clog up the television. It was the unanimous view in both focus groups that negative advertising was a turnoff. When I talk to voters, that is almost always what they say, but it's also true that the ads that are often the most effective are the negative ones. In the Charlotte focus group, the one ad a participant could remember was a negative hit on incumbent Democratic Sen. Kay Hagan.

Or, these data mean campaigns have to create ads or communications strategies that meet audiences where they are migrating. That's where smart campaigns are headed--and that's why the poll was sponsored by the Republican firm Targeted Victory and the Democratic firm Well and Lighthouse. Both firms help political candidates navigate this new landscape.

The key to reaching voters, says Democratic pollster Julie Hootkin, is for campaigns to grab voters when they are in information-seeking mode. Participants in the focus group said that they turned to their tablets or computers to check information they saw on television. One woman in Charlotte checked on the backstory behind two actors in a drama. Another gentleman checked to see how a local law would affect him. A third wanted to know if the Dollar Shave Club was a legitimate operation, and a cat owner bought a tool for picking up cat hair she'd seen on TV.

Candidates may be able to push people from their televisions to their other devices. If an ad gets voters to visit a website with their tablet or smartphone, then it's possible they might hand over information that will let the campaign turn them into a supporter. But campaigns need to be careful: If a campaign interrupts voters' smartphone time, it may lose them. People are willing to let political solicitations come into their home (their most private actual space), but participants in the focus group guarded access to their smartphones like it was their bedroom. One man called it his "sacred zone."

If people are habituated to checking what they see on television on their phones and tablets, that would seem to offer an opportunity to news outlets. We're here to give you those facts and answer those questions you have about distorted ads, crazy debate claims, or whatever else ails you. But when participants were asked whether they used their devices to check what they'd heard in commercials or to research candidates, the answers were pretty grim for reporters. No one trusted anyone in the news business: They were either ideologically biased or influenced by money. Gallup says only 44 percent of the country trusts the news media. "I trust MSNBC more than I trust Fox News," said one participant. "But does that mean I trust MSNBC? No." Another respondent cited the Des Moines Register as a source of information, but then when asked if he trusted the paper, answered no. "That's why I try to stay away from TV. I don't trust anything I see there," said another participant.

The overwhelming feeling is that the participants were frustrated with information they found anywhere other than Wikipedia because they were always discovering that the information was tainted in some way. That's why five of the 10 participants in the Des Moines focus group said they preferred to get information from candidates directly. At least they knew that information was biased, and they could make their own determinations from there.

Reporters viewing the questioning were asked if we had any questions we wanted to ask the group. I asked if they spent more time researching candidates or picking out big consumer items like a car or a large-screen television. In Des Moines only one woman spent more time on politics. "I think at the end of the day we've got a two-party system, and if you lean one way or the other, the odds that you are going to change your position is minimal," said one gentleman. "I almost know what I am going to do before these campaigns start. All you're doing is picking between two cars anyway." In Charlotte it was a mix. (The group dynamic created a brief flurry of competitive patriotism as people jockeyed to show they were good citizens, which sometimes happens in a focus group.) Those who were honest about their consumer product homework said they spent more time on it because their choice of a car or blender would actually affect their lives most directly. With an election, it isn't so clear. "With a candidate you might think you have eight options, but then when you vote, you don't have the eight options," said Sheila in Charlotte. "It's not the deluxe model you thought it was."