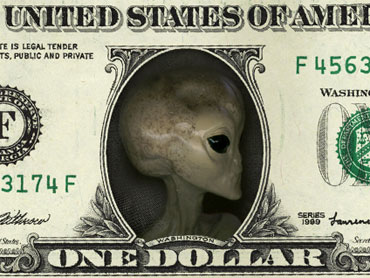 We know that the Search for Extraterrestrial Intelligence (SETI) is often strapped for cash. But what if the aliens out there trying to reach us, rather than being far superior technologically and beaming signals in all directions, are actually starving scientists, too?

In a pair of papers in Astrobiology, three members of the Benford family-Gregory, an astrophysicist and sci-fi author; James, president of Microwave Sciences; and James' son Dominic, of NASA-ponder the possibility of E.T. trying to reach us on a budget, and say that we might have to revise the way we hitherto have watched. According to [New Scientist]:

Aliens wishing to communicate would probably broadcast at frequencies between 1 and 10 gigahertz, where there is less astronomical background noise than in other wavebands. Most SETI projects tune in to the "cosmic water hole" waveband between 1.42 and 1.72 gigahertz. The reasoning goes that alien astronomers might expect earthly scientists to be looking there anyway as this is the frequency of radiation emitted by interstellar hydrogen and hydroxyl clouds.

But, the Benfords say, it would be more cost-effective from the aliens' perspective to transmit closer to 10 GHz. Given the energy needed to continuously broadcast in all directions, the authors say that aliens probably wouldn't do that either. Instead, it's more likely they send short pulses, and that they do it across the plane of the galaxy toward as many stars as possible.

The problem, then, becomes picking out a tweet from the noise in space. The best candidates, the Benfords say, would be brief flashes that shone for a few seconds and then vanished. Because those kinds of signals have been spotted before, they're trying to get scientists to comb the records for possibilities. But, there are other possible explanations for this kind of phenomena, like flare stars and pulsars.

We don't have to just sit and watch, either. The Benfords propose a way for humans to create the kind of signals they say aliens are likely to make, and might therefore expect. However, for astronomers focused on cost-cutting, they're talking about an awful lot of money.

They calculated that a galactic-scale beacon, with an antenna roughly a half-mile (0.9 km) wide with a range of a little more than 1,000 light-years, could be built for $1.3 billion. It would cost $200 million annually to operate. To work economically, it would use only narrow, high-power microwave beams and 35-second bursts aimed at each target star. "Of course, if you want to send a message, first you have to find a billionaire for this," Gregory Benford says].