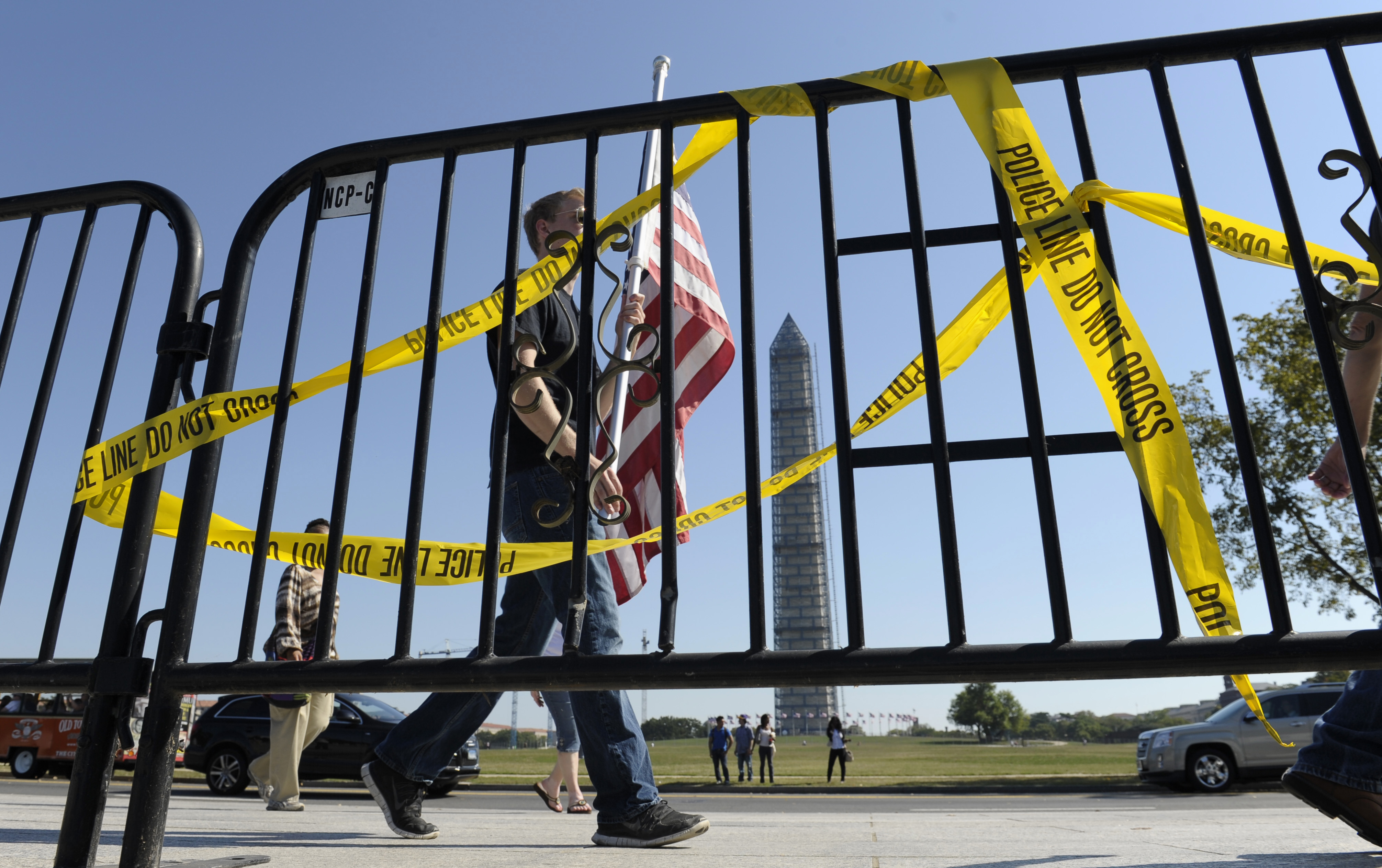 Crafting a workable funding deal to resurrect the government "isn't some damn game," House Speaker John Boehner, R-Ohio, said late last week. And as lawmakers take to Capitol Hill on Monday - seven days after the partial shutdown began and 10 out from potentially defaulting on their loans - that much is clear: The two parties can't even seem to find the same playing field.

Over the weekend, Republicans and Democrats hit the Sunday show circuit to continue their infinite round of finger-pointing, offering no indication that either party will head into week two of the shutdown wielding concessions toward a plan that would get 800,000 furloughed government employees back to work. In an interview that aired on ABC's "This Week," Boehner maintained the GOP position that Democrats must agree to partially dismantling or delaying President Obama's health care law as a condition of re-opening the government; various Democrats, for their part, continued to flatly reject that option.

Now barreling toward an Oct. 17 deadline to raise the debt ceiling or face a first-ever default on its financial obligations, Congress has several possible scenarios unfolding on the road ahead, hinging entirely on the bullheadedness of Republicans, Democrats or both.

Congressional Democrats aren't going to show up for work Monday with the announcement that they're suddenly on board with delaying or stripping down the president's Affordable Care Act as a proviso of reopening the government. Even if they did, they'd find themselves fumbling for any real effect, considering a major portion of "Obamacare" actually activated last Tuesday.

A few House Democrats, though, suggested last week they could go for a smaller-scale alteration. Twenty-some lawmakers from both the right and left appeared at a press conference Thursday pushing a proposal that would repeal the health care law's 2.3 percent tax on medical device sales with the qualification that Republican lawmakers would sign onto a short-term continuing resolution to keep the government afloat.

It's a long shot. Senate Majority Leader Harry Reid, D-Nev., whose own outlook on the tax has become somewhat muddied, called the plan "an act of desperation;" his colleague Sen. Chuck Schumer, D-N.Y., cautioned that such a repeal would set a troubling precedent.

"The hard right says 'see, by holding a gun to their heads, we got something that we wanted. We'll up the ante this time,'" Schumer said, according to the Wall Street Journal. "So it's not the specific proposal - the device tax doesn't seem like that much of Obamacare - it's the method: we're going to threaten and shut the government down until you agree with us.

There are some Republicans who are just as unhappy with their party's strings-attached strategy as Democrats are. Sen. John McCain, R-Ariz., in a floor speech last month effectively called for an end to the Republican crusade, reminding his colleagues that "the people spoke" on healthcare when they elected Mr. Obama in 2008 - and again, in 2012.

On Friday House Democrats began circulating a "discharge petition" which, if signed by a majority of House members, could force a vote on a spending bill to reopen the government. It was a direct counter to Boehner, who under the gun of his party's rightmost wing maintains that his chamber doesn't have the votes for the Democrat-proposed "clean" bill, which would fund the government without any miscellaneous baggage - like provisions to alter "Obamacare" - attached.

"Well then why doesn't he put it on the floor and give it a chance?" Treasury Secretary Jack Lew said Sunday on "Face the Nation," challenging Boehner to allow the House vote one way or another. "There's a majority in Congress that I believe is prepared to do the right thing, to open the government and make sure we don't cross over that abyss."

Sen. Chuck Schumer, D-N.Y., reiterated that sentiment on ABC, hinting that enough Republicans could peel off to push through a clean funding bill.

"The speaker said there aren't the votes on the floor to re-open the government," Schumer said. "Let me issue him a friendly challenge: put it on the floor Monday or Tuesday. I would bet there are the votes to pass it. We have just about every Democrat, 21 Republicans have publicly said they would. There are many more Republicans who have said that they privately would. So, Speaker Boehner, just vote. Put it on the floor and let's see if you're right."

The feud roils on

OK so, it's Oct. 17, the government is still shut down and now Congress is about to default on its loans because Republicans and Democrats are still playing chicken with the country's money. Now what?

"Nothing good," Lew said on "Face the Nation." Even with minor savings from the shutdown, the Treasury Department - still responsible for Social Security, Medicare, and military payments - would likely exhaust its bank account by Nov. 1.

According to a report from the New York Times, Boehner has said he will not let the nation default on its debt and will be willing to put a bill on the House floor to raise the debt ceiling, even if it doesn't have the support of a majority of his caucus. Boehner spokesman Brendan Buck told CBS Newsthat Boehner doesn't want to default, but denied that Boehner plans to pass a debt limit bill with Democratic votes.

But even with Boehner rallying behind a no-default poster, it's not that easy.

Sen. Ted Cruz, R-Texas, who last week pulled off an epic, 21-plus-hour floor speech in protest of the president's healthcare law, suggested to CNN's "State of the Union" on Sunday that he plans to carry his anti-"Obamacare" campaign into the debt limit fight, suggesting legislation to raise the debt ceiling could be the best leverage Congress has to modify the Affordable Care Act.

It's unlikely, but at this point, it's about as realistic as anything else.

According to Politico, Boehner posited the idea of a grand deal that wraps up a spending bill, a debt limit increase and other fiscal policies into one neat package during a meeting at the White House with Mr. Obama. And, "everybody laughed at him because they've heard this song and dance so many times before," said a Democratic aide briefed on the gathering.

Still, the idea might be gaining traction among some Republicans, even though no one in GOP leadership seems to be broaching the subject.

Rep. Steve Stivers, R-Ohio, explained to Politico the appeal of a grand bargain: "We're getting closer to the point that everything's intertwined -- government funding, the debt ceiling and spending -- and so the best way out, I believe, and the only way for everybody to find an acceptable long-term solution is a big negotiation of everything that includes something on entitlements, tax reform, something on a spending level and wrap it in one box."