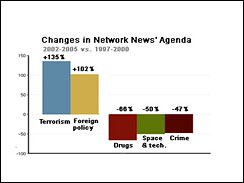 (PEJ; ADT Research)
Much of the news about today's 9/11 anniversary will focus on how the event has changed our lives five years later. But how has 9/11 changed the way news is covered? Today, the Project For Excellence In Journalism has a statistical look at how 9/11 has changed the network evening news broadcasts.

ADT Research (Andrew Tyndall's network news analysis outfit) compared content on the broadcasts from 1997 to 2000, with that of broadcasts four years since (2002 through 2005.) Much of the resulting analysis is predictable – 9/11 has ushered in greater coverage of foreign policy and terrorism -- the number of minutes spent on foreign policy news was up 102% and coverage of terrorism rose 135%, according to ADT's statistics.

However, notes PEJ, "At the same time, there has been a serious decline in reporting about domestic issues. Coverage of crime and law enforcement dropped by half (47%). Science and technology coverage fell by half (50%). Coverage of issues involving alcohol, tobacco and drugs dropped 66%."

While increased coverage of foreign and terrorism-related news is unsurprising, PEJ suggests that a "less obvious" change "is the effect of the shift in coverage on the overall tone of the newscast. For instance, the balance between reporting-driven 'hard news' and softer features, interviews, and commentaries remained virtually unchanged after 9-11. The newscast minutes devoted to hard news increased by a mere 2 % in the years after the attacks while the airtime given to softer coverage decreased by only 5%."

PEJ highlights the content of Katie Couric's first broadcast as anchor of the "Evening News" as an example of an effort to emphasize "feature-style coverage":

The apparent determination, however, to continue to showcase feature-style coverage even in times of war and terror was obvious on Katie Couric's much-anticipated Sept. 5 debut as CBS anchor. After leading with a disquieting story about the resurgence of the Taliban in Afghanistan, the broadcast moved to an interview with columnist Tom Friedman, the first pictures of baby Suri Cruise, a soapbox-style speech by filmmaker Morgan Spurlock and a heart-warming story about Nicaraguan orphans.