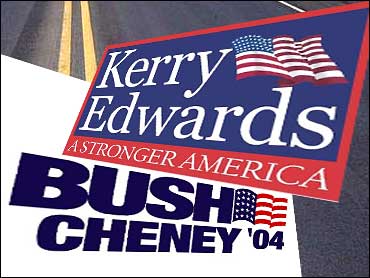 While most national polls show President Bush with a slim lead and Sen. John Kerry gaining ground, the Electoral College makes state polling a better predictor of how Election Day will ultimately shake out.
With that in mind, CBSNews.com takes a closer look at the still-swinging battleground states.

Some of the battlegrounds have left the competitive mix – for now, at least. Washington State's 11 electoral votes and Maine's 4 look solidly in Kerry's camp; while Arizona's 10 and New Hampshire's 4 look to be in President Bush's electoral coffer.

With less than six-weeks left until the election, how the following 14 states go will likely determine who wins the White House:

Florida – 27 electoral votes
Dead Heat: The largest of swing states is also the largest unknown of this presidential election. Polling there is shaky, at best. The most recent American Research Group poll gives Kerry a 1-point lead over Bush, with 6 percent undecided.

President Bush needs Florida more than Sen. Kerry. His 527-vote margin of victory in 2000, following the U.S. Supreme Court ruling, insured his election. If the other two powerhouse swing states go as they did last time – Ohio for Republicans and Pennsylvania for Democrats – then the president must have the Sunshine State in his column.

The president has visited Pennsylvania more than any other state during his four-year term. Why? A victory here by Mr. Bush would be tremendous for Republicans. If Kerry cannot keep Pennsylvania in the Democratic camp he'll need a win in either Ohio or Florida.

Ohio - 20 electoral votes
Tilts to Bush: President Bush won Ohio by 4 percent in 2000 and knows he must win it again. So far, things are swinging slightly his way. The University of Cincinnati, American Research Group and Mason-Dixon show Mr. Bush with a 4-to-11 point lead.

Ohio could be the ground zero of battleground states this year. No Republican has ever won the presidency without the Buckeye State.

Michigan - 17 electoral votes
Tilts to Kerry: The state that lost the most jobs under the Bush presidency looks likely to stay Democratic. The latest Mason-Dixon and American Research Group polls give Kerry a 6-to-8-point lead. Even as traditional labor loses its electoral sway nationally, labor is still a heavyweight here, where a fifth to a quarter of the workforce remains unionized.

Ronald Reagan is the only modern Republican presidential candidate to do well in Michign. If Mr. Bush were to win here, a Kerry presidency appears highly unlikely. But Vice President Cheney was attacking Kerry in Michigan on Tuesday, suggesting that the Bush campaign has conceded nothing in this blue-collar and blue-voting swing state.

Missouri - 11 electoral votes
Tilts to Bush: Mr. Bush won Missouri by 3 percent in 2000 and leads here by 6-to-14 points, according to American Research Group, Mason-Dixon and CNN/USA Today/Gallup.

Minnesota - 10 electoral votes
Dead Heat: Despite a slim lead for President Bush in two polls, some conflict makes this an even race. Both CNN/USA Today/Gallup and Mason-Dixon show Mr. Bush with a 2-point edge. But Kerry has the same lead in the latest American Research Group poll. The point: we don't know how the land of 10,000 lakes is leaning politically.

Al Gore won here in 2000 by 2 percent, but in 2004, Minnesota is well within Mr. Bush's reach. A victory here by President Bush would be an electoral confirmation that this is decreasingly Democratic country.

Wisconsin - 10 electoral votes
Dead Heat: Combined, Minnesota and neighboring Wisconsin carry the electoral might of Ohio. Both states are traditionally Democratic but wide open in 2004.

The American Research Group poll has Bush and Kerry tied at 46 percent in Wisconsin, with 6 percent undecided. Mason-Dixon shows the president with a 2-point lead, within the margin of error and less than the undecided vote. Kerry must make inroads in rural Wisconsin to win here; the days of Madison and Milwaukee carrying the state for Democrats look long gone.

Colorado – 9 electoral votes
Dead Heat: President Bush won here by a solid 7.5 percent in 2000, but either candidate could capture the state in 2004. The latest Mason-Dixon, Public Opinion Strategies and American Research Group polls all show Mr. Bush with a 1 or 2 point lead.

The political war is in high gear in Colorado. The close race recently drove Kerry to get back on the airwaves ahead of schedule. And both parties are fighting to register voters. But Republicans still hold the registration advantage: 37 percent GOP, 32 percent undecided and 31 percent Democratic.

Iowa - 7 electoral votes
Tilts to Bush: Al Gore won Iowa by less than 1 percent in 2000. In 2004, Mr. Bush is leading. In three polls since Sept. 12, the president holds a 2-to-6 point lead, according to Mason-Dixon, American Research Group and CNN/USA Today/Gallup.

Mr. Bush has visited Iowa more than Kerry, who may be assuming that his Boston Brahmin lineage won't catch on in corn country. The president wants this state. A victory for Mr. Bush here could counterbalance a possible Kerry victory in Arkansas.

Arkansas - 6 electoral votes
Tilts to Bush: President Bush won all 11 original Confederate states in 2000, but Arkansas is the one that could defect from him this year.

Mr. Bush carried the state by 5 percent four years ago. The latest American Research Group poll shows him with a 3-point lead over Kerry. With the undecided vote at 5 percent, it remains unclear how Arkansas will go on Election Day.

But former President Clinton proved Democrats could win here. Al Gore didn't utilize the former president. Expect Kerry to call on Mr. Clinton as often as possible come October. Like in Missouri, Kerry has also cancelled advertising in Arkansas, a sign of Mr. Bush's still firm control of the state.

Nevada - 5 electoral votes
Tilts to Bush: President Bush won here by 4 percent in 2000 and is positioned to hold on by a similar margin this year. American Research Group and Mason-Dixon give him a 2-to-5 point lead.

New Mexico - 5 electoral votes
Dead Heat: Like Florida, New Mexico's 2000 vote was almost inconceivably close: Gore won by 366 votes, the smallest margin of victory in 2000. In 2004, polls are conflicting and it's not clear which way the state will go.

President Bush's ability to make inroads with New Mexico's large Latino population will be a key factor in how the state swings.

Also, if one candidate can dominate the sizeable Native American vote, that could also be a factor. Kerry has visited tribal groups that anecdotally say they are being ignored by a Bush administration.

Oregon - 7 electoral votes
Dead Heat: Al Gore won this state by less than 1 percent in 2000, and the state is wide open in 2004. Recent polls conflict: Mason-Dixon has Mr. Bush up by 4, American Research Group has Kerry up by 2.

Kerry just unveiled a 30-second ad attacking Mr. Bush on healthcare. Last week, Democratic vice presidential nominee John Edwards was stumping on the same theme. But can health care win Oregon? As an electoral hammer, it's lacked power for Democrats in the past.

West Virginia - 5 electoral votes
Dead Heat: There are two Democrats for every Republican in West Virginia but you never would have known it in 2000, when Mr. Bush won by 6 percent. Al Gore barely campaigned here. Some say that was because of his unpopular gun-control stance, others say it was because he believed he could win the nation without West Virginia.

American Research Group and Mason-Dixon show the race neck-and-neck this year. Vice President Cheney was here for two days this past week, illustrating the Bush campaign is ready to defend.