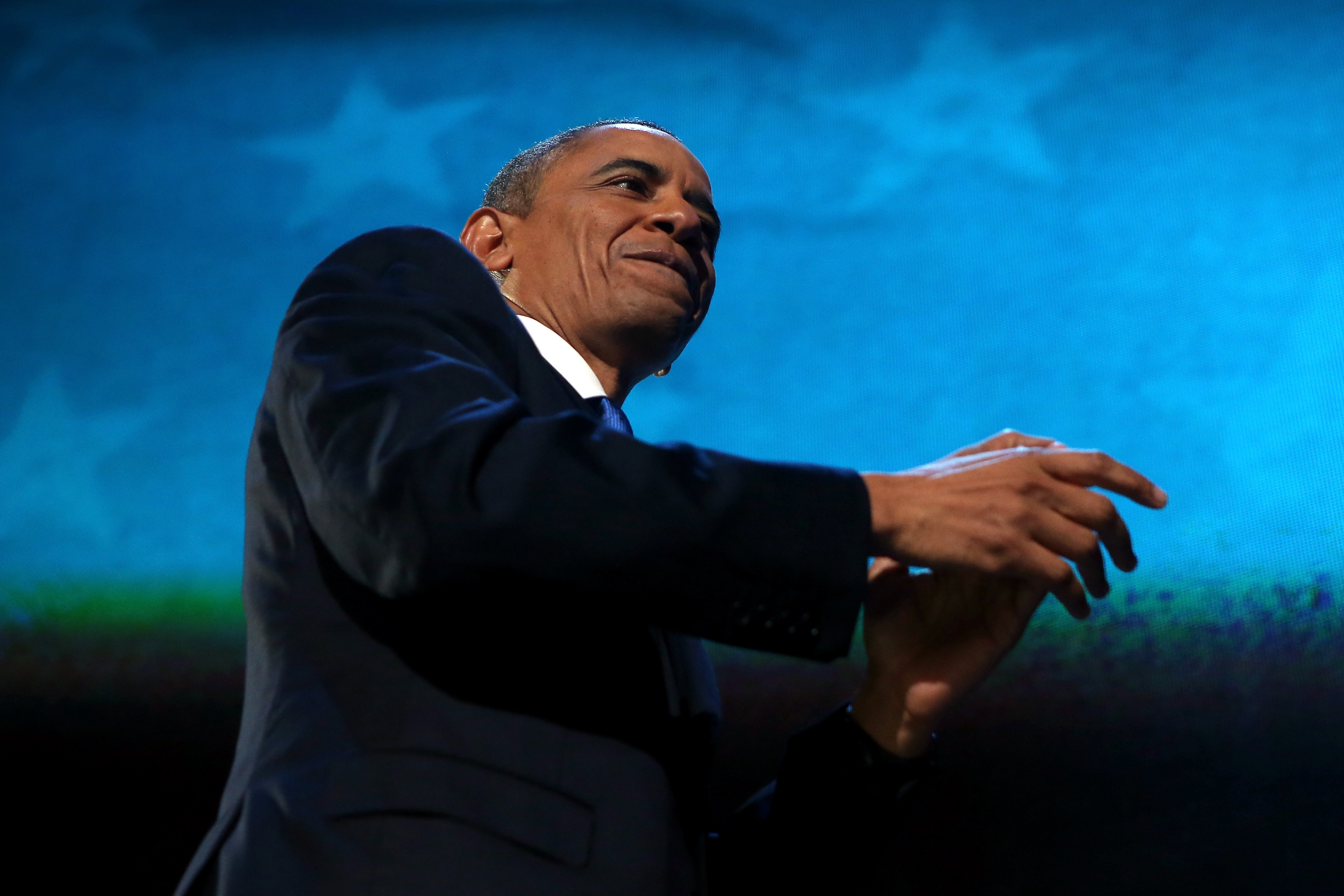 In the end, it wasn't close. Barack Obama won re-election handily over Mitt Romney with 303 electoral votes, well more than the 270 electoral votes needed. Of the nine battleground states that were up for grabs, Obama won 7 of them, losing only North Carolina (Florida remains to be called). But while Obama won those states, he didn't crush it; he won instead, a string of precise narrow victories. He didn't win because his leadership during Hurricane Sandy blew all those swing votes his way (though it may have helped). The president won because he ran a permanent campaign, keeping his offices open in the battleground states from his 2008 campaign, tending his coalition assiduously, and because he relentlessly defined his opponent. His was the better campaign. The Democratic candidate of "hope and change" beat the big business Republican in the trenches, in one state after another.

President Obama's tactical victory is clear when you look at the election returns. He has no grand mandate that comes out of Tuesday's numbers. He has been re-elected, but his policies did not win the day. Voters didn't turn their faces up to the vision he painted they way they did in 2008. When voters were asked which candidate had a vision for the future, Romney won that question in exit polls, 55 percent to 43 percent. Asked about Obama's signature achievement, health care, voters did not approve. Forty-nine percent said they wanted it repealed in part or whole. Voters also said the federal government was too large.

Voters are deeply divided by race and age. The president can credit strong support from women. He led by 11 percentage points among women, while Romney led by 7 points among men. There was also an Obama advantage among younger voters. He grabbed a majority of those under 45. Older voters broke for Romney. Obama lost the white vote by a larger margin than in 2008 when he got 43 percent of the vote. On Tuesday, he got just 40 percent of the white vote. They represented virtually the same share of the electorate as before. But Obama made up for that deficit by winning handily with minorities which represented an ever so slightly larger share of the vote.

The best news the president can find in the exit polls was that he fought the economic question to a tie. Voters who cared about the economy picked Romney by only one point over Obama, 49 percent to 48 percent. Still, Obama simply neutralized his opponent; there's nothing in that number that suggests a mandate. Sixty percent of voters backed Obama's call for tax increases for those with incomes over $250,000. But that's a proposal that will have no life beyond the campaign trail. Polls show that voters have long supported this idea. It doesn't happen because the proposal will never shake loose enough of the partisan opposition to make it real.

Now the candidate of "hope and change" must bind up his wounds and prepare himself for another round. Half of the country is going to be upset by this outcome, and the president, who once knew how to make the music of reconciliation, will have to whip up some kind of stirring message in the months to come.

The White House knew what tone to strike when it released its first post-election photograph, which was not a vision of jubilation but almost relief. In his remarks, Obama immediately moved to start the reconciliation. "We rise or fall together as one nation," he said. He then praised Romney and his family: "From George to Lenore to their son Mitt, they give back through public service and that is a legacy that we honor and applaud tonight." He promised to sit down with Romney in the coming weeks to "talk about moving this country forward." He said the vote was a vote for action to focus on jobs and that in the weeks and months ahead he would work with the other party. "Whether I earned your vote or not ... you have made me a better president. I return to the White House more determined than ever."

What was ratified on election night was the benefit of a permanent campaign and the talent of the Obama team. The much vaunted Obama ground game appears to have been a real thing. (David Axelrod's candidate won by more than a whisker, and Axelrod got to keep his; he'd pledged to shave off his mustache if Obama lost Pennsylvania, Michigan, or Minnesota.) His campaign team was so formidable that it made up for all the inadequacies, vulnerabilities, and missteps (remember that first debate?) of a weak incumbent president in a sputtering economy. He pulled out every stop possible: Bill Clinton, Bruce Springsteen, Stevie Wonder, and Katy Perry in a dress that was as tight as Obama's margin in Florida.

A few theories of political science were upheld. Debates didn't change the outcome and late deciding voters don't break for the challenger. Nine percent of voters said they made up their mind with three days to go, and they broke for the president, 51 percent to Romney's 44 percent.

In the end, Romney was right. It was all about the economy. But Americans seemed to want more than someone who cares about fixing the problem; they want someone they think cares about them. It was the empathy, stupid. When voters were asked which candidate cared more about then, Obama won more than 80 percent of those voters.

The president won among African-Americans, who were 13 percent of the electorate, by 93 percent to 6 percent. He won among Hispanics, 70 percent to 30 percent. Romney's poor performance with Hispanics, in particular, is likely to start a wave of soul-searching in the party about how to reach out to the country's fastest growing minority group.

That's not the only conversation that's going to take place in the Republican Party. With Romney's loss, Republicans will start positioning for the future by winning the argument about the last campaign. There are three possible reasons for Romney's defeat that will be floated. First, he was a bad candidate. Second, the party is out of step with the demographic changes in the country. Third, the hurricane stopped Romney's momentum. The truth is likely to be some combination of all three. Romney was a flawed candidate, out of step with his party and sometimes himself. His shift in the final weeks to a more moderate tone seemed to be a late-in-the-game reversion to a truer self.

Did the storm matter? It's hard to imagine that it did, but 64 percent said the president's response to the hurricane was a factor in their decision. Forty-two percent said it was important to their vote for president. Political scientists will help us determine whether those responses have anything to do with the 9 percent who say they decided in the last three days to vote for Obama.

The president's team always said he had multiple paths to the presidency. That's because he started with 237 electoral votes from safely Democratic states that are a part of what seems like a permanent Democratic wall. This campaign affirmed that New Mexico is a Democratic presidential stronghold and probably did the same for Nevada and Wisconsin. Obama won with a combination of those paths his aides had outlined. He won Nevada and Virginia and Colorado with a mix of minorities and white working-class voters, as well as upscale white suburban voters. In Ohio, Wisconsin, and Iowa, Obama won in states that didn't have big minority populations but he got enough of the white vote to survive. The Obama campaign's Midwest firewall held, though the exit polls were a little hard to read. In Iowa, Obama won among white women, with 58 percent of the vote, but in Ohio he lost among white women, 52 percent to 47 percent. In some states, the president fared even worse. In Virginia, Obama lost white women 58 percent to 41 percent. (This is what was so amazing about the strength of his "new coalition" in states like Virginia, where he could make up for that deficit with other kinds of voters.)

It will take some time to pull through the exit polls, but in Ohio, the state that was the focus of so much attention and that put Obama over the top, he prevailed for two reasons. First, he was able to run on the auto bailout, a tangible economic result voters could feel. (More than half of Ohio voters approved of the bailout.) Second, Obama also won in Ohio because he turned Romney into a symbol of the economy that had put them in an economic fix. In Ohio, on the question of "who cares about you," Obama won the support of 84 percent of the state's voters.

What did voters ultimately decide about Mitt Romney? They didn't think that he was enough of an economic fix-it man, and his favorable rating was just 47 percent. Fifty percent viewed him unfavorably.

The verdict on the Paul Ryan pick seems to be that he neither helped nor hurt. Obama won Ryan's congressional district in Wisconsin (based on a preliminary count of the votes, which could change), so his place on the Republican ticket not only didn't help Romney carry the state, it didn't seem to have helped him carry the portion he represents. Then again, Paul Ryan's Medicare plan was supposed to cost Romney the state of Florida. Those fears were wildly misplaced. Romney-Ryan actually clobbered the president with Florida's seniors. On the specific question of which candidate would better handle the issue of Medicare, Obama lost by a lot. Fifty-four percent of the state's seniors said they trusted Romney on Medicare over Obama, who only earned 40 percent of the vote.

Regardless of what happens in the second term, the president won an enormous victory by protecting his first term's achievements, particularly the Affordable Care Act, which Romney had promised to repeal. Although he won by slimmer margins, he held on to all but two states he won in 2008. That's an incredible accomplishment when you consider the economy he has governed over for the past four years. (And the two states he gave back--North Carolina and Indiana--were always expected to fall back into the GOP column.) Politically, there is no reason to believe his second term will be easier than his first. Republicans will call it a tactical victory and look at the close national vote tally to convince themselves that there's nothing in this election that should cause them to concede ground during the coming budget fight.

Barack Obama won in 2008 as a man who floated above the vast great nation. In 2012, he remade himself into a determined, street-level fighter for the middle-class. During his first campaign, Obama quoted Martin Luther King Jr., who said, "The arc of the moral universe is long, but it bends towards justice." He was the first African-American president in the nation's history. Now he is the first African American president to be reelected. Now that he is freed of the constraints that come from having to get reelected, the president who put his grand visions on hold to survive, can get back to working on that bend.