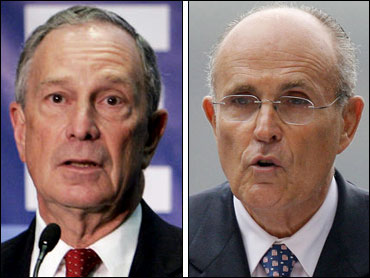 The mayor of the nation's largest city is protected around the clock, even when he's not working. He's trailed on the golf course, at the theater, while visiting relatives for Thanksgiving dinner - with taxpayers footing the bill.

That's usually all but unnoticed. But questions now have arisen about how New York City's mayoral security detail works and how its expenses are handled, after a report that ex-Mayor Rudy Giuliani's administration shuffled around expenses incurred by his security detail on his trips to a Long Island resort as he was beginning an extramarital affair.

In an interview with CBS News anchor Katie Couric on the CBS Evening News on Thursday, the Republican presidential candidate said he had done nothing wrong and dismissed the report as "a typical political hit job with only half the story told."

For as long as anyone can remember, whoever the city's mayor is and wherever he has gone, the New York Police Department has protected him. And not always without incident.

There was the time in 1923 when a police bodyguard blocked a man who charged at Mayor John F. Hylan in the midst of a Board of Estimate meeting. A half-century later, in 1979, police wrestled to the ground assailants who had pelted Mayor Ed Koch with eggs and tried to attack him before a speech at a hotel. Just last month, Mayor Michael Bloomberg's bodyguards tussled with a man who lunged at his entourage on a subway platform.

Bloomberg's spokesman, Stu Loeser, declined to discuss the workings of the mayor's security, but a former police official offered some details.

Mayors typically are protected by a five- or six-person team of plainclothes detectives, including one who often goes ahead to secure the destination. There are generally three teams that rotate for the 24-hour job.

Bodyguards generally have stayed overnight with the mayor in Gracie Mansion, the city's official residence. Bloomberg, a billionaire, has opted to stay in his own town house on a prime block of East 79th Street, where there is now a police booth.

Protection is available for a mayor's family members, but the Police Department makes those decisions based on the individuals and any perceived threat against them.

When Giuliani was in office and having an affair with Judith Nathan - who later became his wife - both she and his then-wife, Donna Hanover, were given protection.

When mayors travel, the costs of the security team are paid by the city. Bloomberg has taken the unusual step of covering their expenses when he takes personal trips.

According to a 2002 letter from the city comptroller and numerous travel receipts and documents released Thursday, Giuliani's administration billed tens of thousands of dollars in security travel expenses to little-known city offices. Those included the Loft Board, which oversees some types of apartments, and an office in charge of helping the disabled.

Giuliani told Couric that the billing practice was not to conceal anything but was for convenience to the officers on the detail, who would otherwise have to wait to be reimbursed by the Police Department.

"This was a way of expediting payment. All of it on the record, all of it discoverable, all of it going on for five or six years," Giuliani added.

The story was first reported by the political Web site Politico.com.

"Hiding the expenses by having agencies other than the Police Department carry them is not warranted - I don't understand why he did that," Koch said.