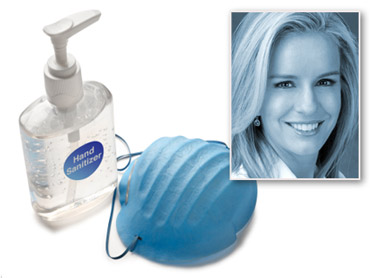 How long do hand sanitizers work?

According to a recent survey, half of all Americans think the antibacterial gels last longer than they do -- which is two minutes, according to germ experts.

The survey was funded by Healthpoint, which sells a sanitizer the company says works for up to six hours.

"It really is!" Ashton said. "Well, we've said before that these are very, very effective in reducing transmission of the germs that can make us sick. It does not give you 100 percent protection and, in fact, I think a lot of Americans were very surprised by that finding that they only work for two minutes. Doctors and surgeons like myself, not so much so. We know when we scrub in before a surgery, we are not eradicating all bacteria from our hands."

So what do hand sanitizers do and why do doctors use them?

"What we are doing is reducing the number, and getting rid of the germs that can make a patient sick or in this case make us sick," she said.

Would you be better off using a hand sanitizer or using soap to wash our hands?

"This has been debated in the surgical literature for years. 'Is soap better, how much time of washing is really effective?' Guess what. They don't really know. What the CDC says is that hand washing with soap and hot water -- and again you have to do it for a prolonged period of time, which most people don't do," Ashton points out. "That is the optimum way to protect yourself. Absent that you want to use an alcohol-based hand sanitizer that is 60 percent alcohol, at least."

On the other hand, hand sanitizers may just work for two minutes, but again Ashton stresses, it's an important two minutes.

"Here's what's important. I shake your hand and I've just seen you cough and sneeze then I'm going to take that contaminated hand now from shaking your hand and touch my face. That's where these sanitizers can really work," Ashton said. "Again, you want to avoid touching your nose and mouth and use them when you can't use soap and water and keep your hands clean."