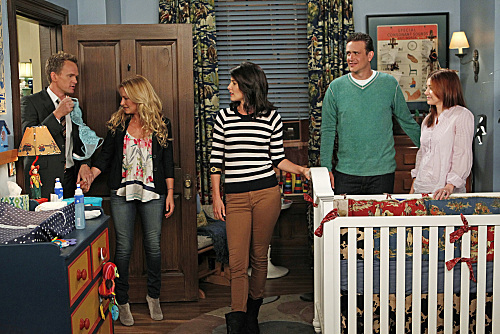 (CBS News) "How I Met Your Mother" debuted its eighth season Monday night and viewers got a little closer to knowing who the mother is.

The show opens in Farhampton and Ted (Josh Radnor) is sitting on a bench in a train station wearing a tux. A woman comes over and asks whether the wedding was nice. After a little nudging, he starts telling her what happened.

At the end of last season it was revealed that Robin (Colbie Smulders) was Barney's (Neil Patrick Harris) bride. When Robin gets cold feet, Ted helps her deal with her feelings and the two rekindle their friendship.

Then the story jumps back to present day and we see Ted and Victoria, his ex girlfriend from the first season, driving off into the sunset. But things take a turn when Ted finds out Victoria didn't leave a note for her fiance Klaus when she left him at the altar. He decides to take her back to leave one.

As Ted tries to sneak into the wedding he runs into Klaus, who is caught leaving the wedding - but not before leaving a note. "It's a common courtesy," Klaus says.

After Ted starts to feel less guilty about running away with Victoria, he starts to wonder why Klaus would leave her. Klaus tells him later that she wasn't the one and that when you do find the one you know "instantaneously."

The episode flashes to the future when Barney and Robin are about to say 'I do'  just as a women arrives in a taxi. She pulls her guitar out of the cab and the camera shows the yellow umbrella - it's the mother. Viewers still haven't seen her face, but she's only a few feet away from Ted Mosby.

Tell us: What did you think of the "HIMYM" season premiere?