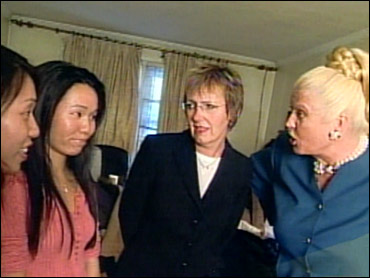 It's pretty safe to say that very few homes are as dirty as the ones you can see on Lifetime's new television show, "How Clean Is Your House?" The Early Show correspondent Melinda Murphy has a preview of the show. Just a word of caution: Some of the things described are downright disgusting.

Kim Woodburn and Aggie MacKenzie are Britain's hottest grime fighters. Their hit television show is called "How Clean Is Your House?" It's a makeover show of sorts, clutter to clean. And now these high-falutin' maids are making their way across the pond to the U.S.

Looking quite sharp, Kim says she normally wears a bit more makeup to scrub her own house. "Hair a bit highter and a bit more perky. I'm actually a bit understated today," she tells Murphy with a laugh.

Well, there's nothing understated about their mission: Clean the foulest homes in the U.S.

Aggie notes, "We've discovered that the houses here are no better and no worse than the ones at home. Just as filthy."

A home in Flushing, N.Y., where the team visited for this report, proved their point. Though Murphy seemed disgusted by the task at hand, Kim and Aggie seemed to delight in scraping, and scratching, and even sniffing.

And who could blame them? They dig through piles of clothes, dusty stairs and the most disgusting bathroom they've ever seen.

So why would anybody let America see their house like this?

Housemates Kathy and Janet take turns saying, "It's embarassing, yeah, but you know, we needed help."

Of course, Kathy and Janet didn't quite realize what they were in for.

"You live in a dirty filthy hovel, girls," Kim says.

Kathy replies, "I'm not denying that."

Kim continues, "Don't be sassy with me, I'm speaking."

After a royal roasting about health dangers, the gals had to do some of the cleaning themselves.

But no worries, Kim and Aggie have some tips.

"I'm going to cover the brown spots with paper so the bleach absorbs into the paper. It stays put and gives it a jolly good chance to get this sink- see what I mean, girls – clean," Kim says.

To get it done in a day, an army of cleaners shows up to help.

Of course, Kim and Aggie's crew had to work through the night. Murphy caught up with everybody the next day when the girls saw the final result for the first time.

Janet adds, "It's like a home and how it should be. Thank you."

"Are you going to behave yourselves?" Aggie asks. Kathy replies, "Yeah, we will."

Hopefully, they mean it.

The cleaning team actually checks on the houses to see if they keep them clean. They have a surprise visit two weeks later to see what's what. And believe it or not, most of the folks have actually changed their living habits, so Aggie is right. The show changes lives.