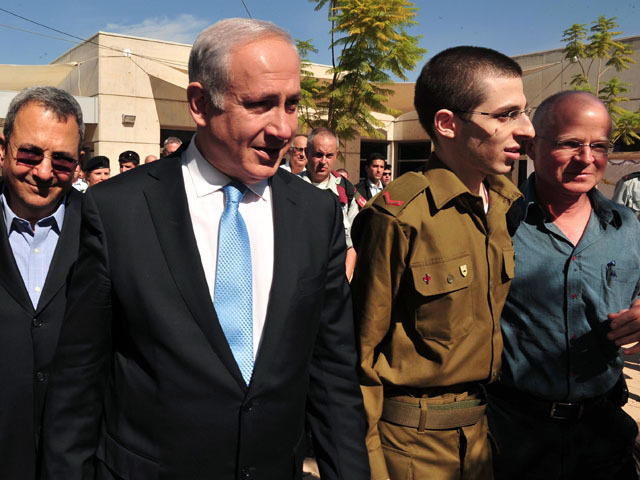 Israeli Prime Minister Benjamin Netanyahu, previously counted among the toughest leaders in the civilized world, has become softer than the secretary general of the United Nations. Netanyahu recently ransomed a kidnapped Israeli soldier whom Hamas had held hostage since 2006. The price for Sgt. Gilad Shalit's freedom? Israel will free 1,027 Palestinian prisoners. Many are hardened terrorists with Israeli and even American blood on their hands. This colossal breach of justice for these victims injects this toxic population back into society. Some of them almost certainly will express their gratitude with machine guns and dynamite.

The first wave of 477 prisoners swapped for Shalit includes at least three terrorists who have slaughtered Americans.

Now carefree in Jordan, despite 16 life sentences, Tamimi has no regrets.

"It was a calculated act, performed with conviction and faith in Allah," she told a Hamas website. "Jihad warriors are always ready to die as martyrs, to be arrested -- or to succeed. I managed to overcome the barrier of prison and was released. Why should I repent?"

In addition to the 469 other prisoners released on October 18, Israel soon will free another 550 dangerous characters -- all to rescue one Israeli soldier.

With all due respect and sympathy for Sergeant Shalit, this was a stupid, disproportionate, and likely deadly decision.

In October 2010, the U.S.-Israeli Almagor Terror Victims Association counted at least 30 attacks involving Islamic extremists liberated by Israel's government. Almagor reports that 177 people have been murdered, and many others injured, in attacks that Israel could have prevented simply by keeping these savages caged.

While Israel now has complicated its own anti-terrorist vigilance, America cannot rest either. Some of these freed killers will remain in Israel, the West Bank, and Gaza, from which they can attack Israelis. That would be bad enough.

Some of the more adventurous terrorists, however, might use their new and undeserved freedom to target Americans. Why not teach Israel's chief benefactor and staunchest ally a lesson by, say, blasting a U.S. bank branch elsewhere in the Middle East -- or beyond? No American embassy, hotel, military base, or bar full of laughing, singing U.S. tourists is any safer for Netanyahu's folly -- from London to Lima.

And why not bomb Americans in Long Island or Los Angeles? A quick flight from, say, Cairo through Frankfurt to Mexico City, and then over the well-trampled route across America's wide-open southern frontier (or via the even more vulnerable northern border), and jihad in America can become a reality for any of these hundreds of dedicated terrorists that Israel has escorted right onto the street.

Also, Netanyahu idiotically has fixed the terrorist-soldier exchange rate at approximately 1,000 to one. With 3,997 Palestinians still in custody as of August 31, not counting the 1,027 swap beneficiaries, Hamas needs to kidnap just four Israeli soldiers in order to demand freedom for all of its detained comrades. My friend Jacob Laksin reports in FrontPageMag.com that Palestinians in Gaza already have begun to chant: "The people want a new Gilad!"

Ironically, President Obama, who is sometimes considered soft on terrorism, has deployed drones and Navy SEALS overseas to blow major terrorists into splinters, due process be damned. (Hooray for that!) In contrast, Netanyahu -- approximately the Ronald Reagan of Israel -- liberates thousands of Islamic-extremist killers, like a one-man Israeli ACLU.

"Do not release jailed terrorists. . . . Prisoner releases only embolden terrorists by giving them the feeling that even if they are caught, their punishment will be brief. Worse, by leading terrorists to think such [prisoner-exchange] demands are likely to be met, they encourage precisely the kind of terrorist blackmail they are supposed to defuse."

This sound advice was offered by none other than . . . Benjamin Netanyahu on page 144 of his 1995 book Fighting Terrorism: How Democracies Can Defeat Domestic and International Terrorism.

Israel urgently needs something far closer to the Obama model. Rather than "punish" terrorist killers with meaningless multiple life sentences, Israel should give them the death penalty -- good and hard. Terrorists can be neither demanded, nor exchanged, nor killed again, while dead. Israel should execute this filth, cremate them, and then dump their ashes into the Mediterranean. They will no longer bother anyone, save for a few unfortunate fish that will deserve apologies for having to swim amid such filth.

Bio: Deroy Murdock is a fellow with the Hoover Institution on War, Revolution and Peace at Stanford University. Counterterrorism researchers Mitchell Baxter and Laurence Herman supplied information for this article. The opinions expressed in this commentary are solely those of the author.