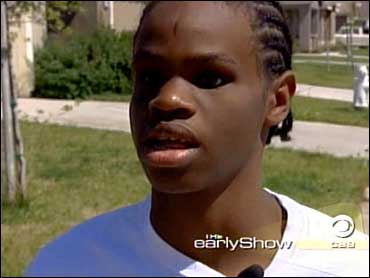 In a pillow fight, 14-year-old Ben Underwood can deliver a dead-on shot; in foosball, he's a determined competitor; when a video game is going, his fingers fly. And when he is on his skates, he's fearless. For most teenagers, it's nothing remarkable. But Ben is blind.

As CBS News correspondent John Blackstone found out, Ben uses sound to find his way around. To walk down the street with Ben is to be amazed at what he can see with his "ears."

Ben makes clicking sounds and while walking down a sidewalk can even determine the difference between a fire hydrant and a trash can.

Ben was just 2 years old when cancer claimed his eyes. Both were surgically removed. It was a day of heartbreak for his mother, Aquanetta Gordon.

From that day on, Ben has used his hearing, his sense of touch, his sense of smell to conquer a world of darkness. And he is good: while going for a walk with Blackstone, Ben deftly stepped around a fallen trash can on the sidewalk.

Somehow, Ben has mastered echolocation. It's the same way dolphins get around, bouncing sound waves to figure out where they are.

On a trip to Sea World a few weeks ago, Ben found that he and the dolphins shared an amazing talent.

Out of the water, it becomes easy to forget that Ben is blind, as Blackstone found out when he was beaten 5-2 in a friendly match of foosball.

Playing video games with his brother Isaiah, in the assault of noise, Ben can figure out everything that's happening just by listening.

How does he manage to compete? "Because they got different voices," Ben explains.

"Nobody is going to tell him that there is an impossibility for him. 'Cause there are none," says his mom.

"This mom ought to be teaching a course on how do you raise a kid who can't see well," says Kaiser-Permanente ophthalmologist Dr. James Ruben.

He says Aquanetta has done exactly the right thing with Ben: never being overprotective and never putting limits on him. "You know, I think the real story here is not, is not his talents, but his attitude. And attitude is what it's really about."

Aquanetta agrees. "We have to give our kids confidence. We give them pride. Empower him with who he is, and be proud of who you are, no matter what!" she says.

Watching him in action, it seems clear that Ben really can do anything.

You can learn more about Ben by visiting People.com.