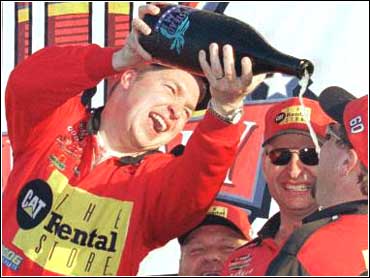 Houston, who started third, had a near disastrous pit stop on the 57th lap when miscommunication with crew chief Rick Ren led the driver to believe the crew was changing two tires instead of four.

Houston drove away after the truck's right-side tires were switched, brushing jack man Hugheston Caldwell to the ground. Caldwell was not injured.

"I made some mistakes today and the pit stop was just my fault," Houston said. "I hit my jack man and I'm sorry for that and I apologize to him. I guess I just had to go on and win the race."

"It worked out OK, but we sure didn't plan it that way. I knew we had a good truck and the longer it went the better it go. I started running those guys down before those last pit stops. We just drove away."

Houston, whose last series win came Aug. 2, 1998, in New Hampshire, took the lead for the final time on the 142nd lap around the 1.5-mile Homestead-Miami Speedway when the race leaders pitted.

The Chevrolet driver, who pitted for tires and fuel just eight laps earlier, elected to remain on the track for the final 25 laps. Four rivals gave chase, but Houston gradually pulled away, beating Daytona 250 winner Mike Wallace's Ford by 4.505 seconds.

Defending series champion Jack Sprague, who finished among the top five in three of the past four events at the speedway, was third in a Chevy.

Pole starter Joe Ruttman, who led the first 23 laps in his Dodge, settled for fourth. Greg Biffle, who surrendered the lead to Houston during the final caution, finished fifth.