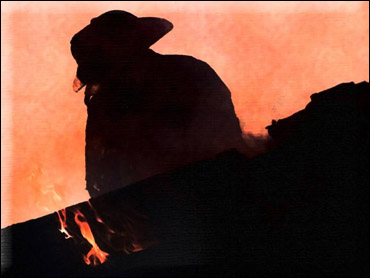 HOUSTON - A fire swept through a home daycare center Thursday, killing four children and injuring three others, fire officials said. The children ranged in age from 18 months to 3 years old.

The blaze broke out at Jackie's Child Care, which was being run out of a house in western Houston, Assistant Fire Chief Bill Barry said.

Firefighters arriving at the scene found two children who had been injured outside the home and five more trapped inside. They rescued those inside and took all seven to Houston hospitals.

Three died after being taken to a hospital, Barry said. No other information was immediately available on those who died or the conditions of those injured.

"We're still moving forward trying to connect parents back to kids and get confirmation status," said Lt. Rick Flanagan, the Houston fire department's executive assistant chief. He said he had no genders, names nor ages beyond the range Berry provided. Flanagan said all the children in the house were exposed to smoke.

Neighbor Michael McAndrews, 50, told the Houston Chronicle that center operator Jessica Tata was outside the center during the fire yelling frantically, "My kids, my kids, pray for them."

McAndrews said Tata told him that she had gone to the bathroom and returned to find the kitchen on fire.

Authorities were investigating the cause of the blaze.

The residence was licensed last March 1 as a registered child-care home, according to Texas Department of Family and Protective Services records. That means as many as 12 children could be cared for during a 24-hour period, although they couldn't live at the home.

Before the home opened, it was cited for not having a fire extinguisher or carbon monoxide detector, but the deficiency was corrected last Feb. 24, the records show. Gwen Carter, a Houston spokeswoman for the agency, said staff members physically saw the fire extinguisher before the license was granted.

No problems have been reported at the home since it was licensed, Carter said. Once licenses are granted, child care facilities are inspected every two years unless there's a complaint or particular concern, she said.

Carter said two department staff members were sent to the house when the fire broke out and that an investigation will be launched.

"I saw them running down the street holding babies, running, because there wasn't enough room for the emergency vehicles to get through," she told the Chronicle.

Sawyer said when Tata was outside she thought there were still two children in the residence.

"She thought two of them crawled out of their cribs and didn't know where they were," Sawyer said.