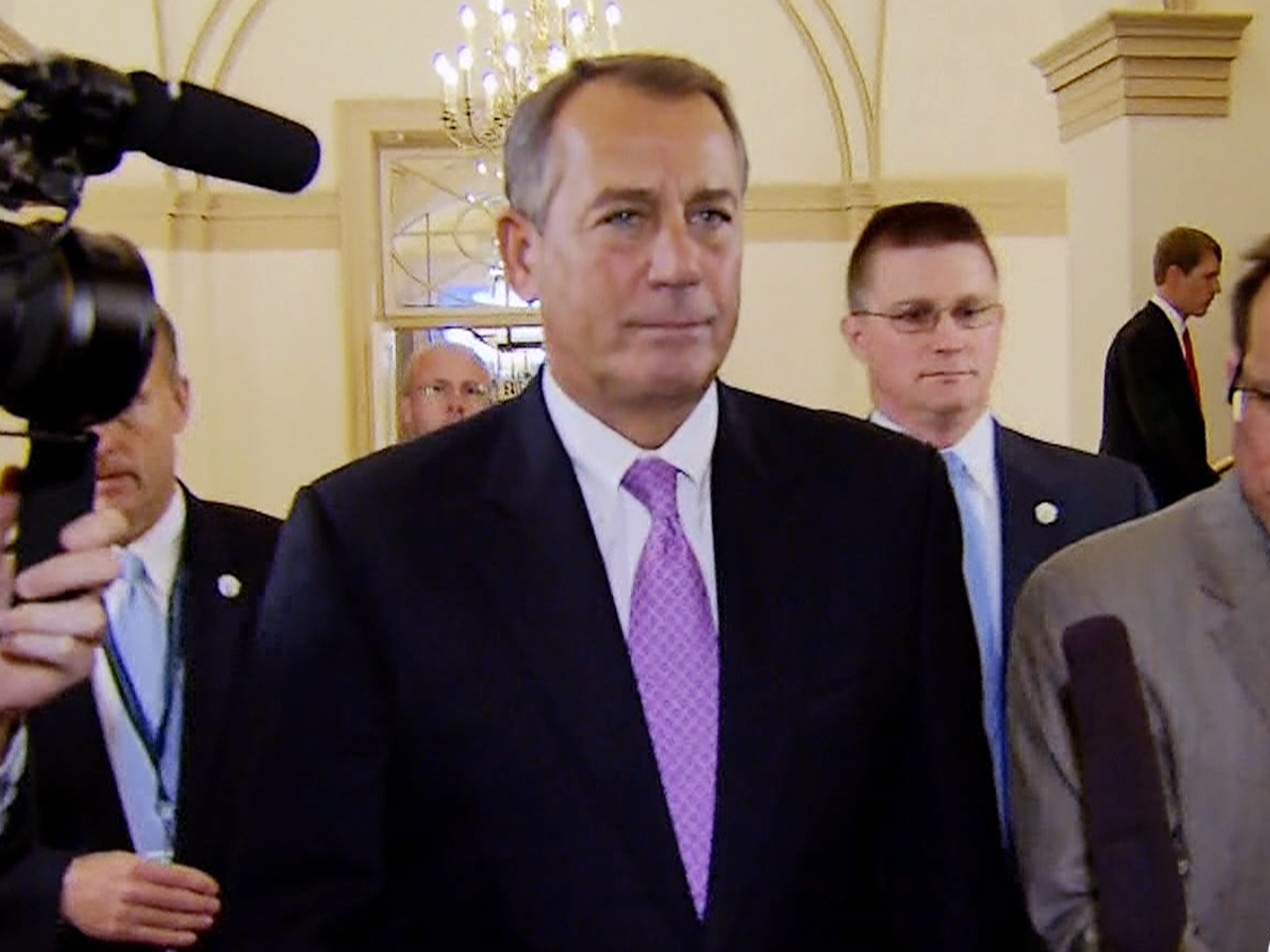 House Speaker John Boehner told the House Republican Conference this morning that, given the short time before America goes over the so-called "fiscal cliff," the House will begin work on a "Plan B" to let taxes go up on income over $1 million. President Obama and Senate Democrats, however, were quick to shoot down Boehner's "plan B."

Boehner and Mr. Obama have been moving closer to a deal over an economic package as they attempt to avert the "cliff" -- a series of tax hikes and across-the-board spending cuts set to kick in at the start of next year. Negotiations will continue, but with the clock ticking down, the House will take up its "plan B" to ensure that most Americans won't see an income tax hike on Jan. 1.

The president's latest offer calls for $1.2 trillion in revenue and $930 billion in spending cuts, with the revenue coming from higher income taxes on income over $400,000. "That's not balanced in my opinion," Boehner said today in a press conference. "So at the same time that we're going to continue to talk to the president we're going to also move plan B."

He added, however, that he still has "hope" that "we can reach a broader agreement with the White House that would reduce spending as well as have revenues on the table."

In response to Boehner's "plan B," White House press secretary Jay Carney said that Mr. Obama has already put a "balanced, reasonable proposal" on the table. Mr. Obama, Carney said in a statement, "is not willing to accept a deal that doesn't ask enough of the very wealthiest in taxes and instead shifts the burden to the middle class and seniors."

"The Speaker's 'Plan B' approach doesn't meet this test because it can't pass the Senate and therefore will not protect middle class families, and does little to address our fiscal challenges with zero spending cuts," Carney continued. "The President is hopeful that both sides can work out remaining differences and reach a solution so we don't miss the opportunity in front of us today."

"The Senate bill is the only 'plan B' that can be signed into law and prevent taxes from rising by $2,200 on the average middle-class family," Reid said. "Now is the time to show leadership, not kick the can down the road. Speaker Boehner should focus his energy on forging a large-scale deficit reduction agreement. It would be a shame if Republicans abandoned productive negotiations due to pressure from the Tea Party, as they have time and again."

Technically, the House plans on voting on the Senate bill, which extends current rates on income under $250,000. However, the House would amend that bill to raise the income level to $1 million and send the bill back to the Senate.

Boehner said today that the "plan B" vote could also address other parts of the "fiscal cliff" such as extensions of the alternative minimum tax (amt) and the estate tax rates. It will not, however, address what's called the "sequester" -- $1.2 trillion in cuts that are split between defense spending and non-defense spending.

"I think we all know that every income tax filer in America is going to pay higher rates come January 1 unless Congress acts," he said. "So I believe it's important that we protect as many American taxpayers as we can. And our plan B would protect American taxpayers who make $1 million or less and have all of their current rates extended."

Republicans are quick to point out that Democrats have said for years they'd be happy with extending the Bush-era tax rates for income under $1 million. Indeed, Senate Democrats voted on such a plan in 2010, and in March of this year, House Democratic leader Nancy Pelosi called on Republicans to do the same. "Democrats believe that tax cuts for those earning over a million dollars a year should expire and that we should use the resulting revenues to pay down the deficit," she wrote in a letter to Boehner.

"For years, Washington Democrats - led by Sen. Schumer and Rep. Nancy Pelosi - have been calling for a bill to stop the tax hikes except on millionaires," Boehner's spokesman Michael Steel said in a statement. "To oppose it now would make them entirely responsible for the tax hikes that tens of millions of Americans face in less than two weeks. They know that, and the President knows that."

Boehner has been working closely with Mr. Obama -- he met with him for nearly an hour in the Oval Office yesterday and spoke with him over the phone last night. Both sides agree that they should extend current tax rates, first enacted during the Bush administration, at the very least for the middle class. However, even if Boehner were to accept Mr. Obama's latest proposal, all Americans would still see a tax hike -- that's because his proposal would let the 2 percent payroll tax cut expire.

With reporting from Jill Jackson, Nancy Cordes and Lucy Madison