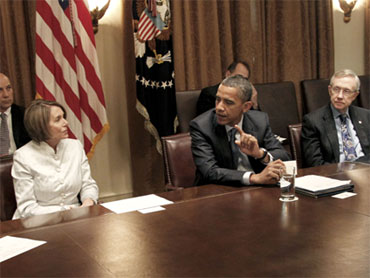 The House is sending to President Barack Obama a bill to fund the troop surge in Afghanistan after accepting the reality that adding money for domestic programs was unfeasible.

House Democrats reluctantly voted for the $59 billion measure Tuesday that will pay for Obama's 30,000-troop surge and other programs such as replenishing disaster funds. But the bill was stripped of money to keep teachers on the job or boost student aid. The vote comes a week after the Senate soundly rejected the larger House-favored bill.

The bill contains $33 billion to pay for the new troops in Afghanistan and other Pentagon programs.

Obama requested the war money in February, but the bill became a staging ground for a battle over adding money for domestic needs.

In the House Tuesday, the Mr. Obama's own party was split down the middle on a crucial war funding vote. Liberal war critics used the leaked documents as a weapon. Mr. Obama found himself in the unusual position of relying on Republicans to pass his bill, reports Reid.

Press secretary Robert Gibbs said it's hard to wage war without the support of the American people. "I think obviously public opinion matters quite a bit when you have your forces in harm's way," he said.

In fact only in the early years did Americans believe the war in Afghanistan was going well. Between 2003 and 2008 when the focus was on Iraq support plummeted. After some minor ups and downs, today's approval stands at a mere 31 percent.

Even if Mr. Obama's right that there isn't much new in the leaked documents, they still threaten to turn public opinion against the war even more by focusing a spotlight on all that's gone wrong. The war funding bill now goes to Mr. Obama for his signature but it only funds the war for a few months so another big battle over paying for the war in Afghanistan is just around the corner.

More on the Afghan War WikiLeaks: