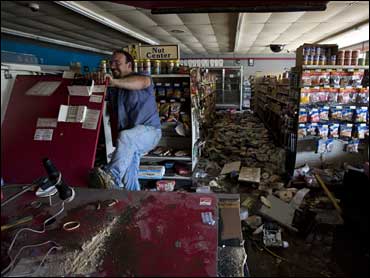 House leaders in both parties have announced a deal on a long-overdue war funding bill. They say President Bush will sign it.

The agreement on the war funding bill, announced by Majority Leader Steny Hoyer and GOP leader John Boehner, paves the way for billions of dollars in emergency flood relief for the Midwest, an extension of unemployment payments for people whose benefits have run out and a big boost in GI Bill college benefits for veterans.

It would also provide about $165 billion to the Pentagon to fund military operations in Iraq and Afghanistan for about a year. That's enough time for Bush's successor to set Iraq policy.

Lawmakers on Capitol Hill negotiated privately Wednesday over how much money to add to President Bush's informal $1.8 billion request for flood relief. Mr. Bush requested funding for the government's main disaster relief fund, as well as help for farmers and small businesses.

A dozen senators in both parties were pressing to add money for levee repair and help for displaced homeowners, among other pressing needs. House Appropriations Committee Chairman David Obey, D-Wis., was cobbling together a bulked-up flood relief package Wednesday afternoon.

Democrats were also seeking to iron out sticking points on the war funding bill, which has been delayed for months amid internal Democratic Party wrangling. Key battles are over how much non-war-related legislation and spending to add to Mr. Bush's war request and whether to abide by rules requiring such add-ons - especially a huge increase in GI Bill college benefits for veterans - to be "paid for" instead of added to the U.S. debt.

In addition to the emergency flood aid, Democrats hope to use the Iraq funding bill as an engine to advance a 13-week extension of unemployment payments for people whose benefits have run out, as well as the GI bill benefits. The GI Bill benefits, originally slated to cost $52 billion over 10 years, would be $10 billion more generous over the same period to meet a Pentagon request to permit service members to transfer them to their spouses or children.

Republicans, meanwhile, seem anxious to reach an agreement to extend unemployment benefits rather than go to the mat to defend a Bush veto.

Throughout weeks of behind-the-scenes talks, House Democrats such as Obey have pressed to send Mr. Bush a war funding bill he can sign rather than have a veto override vote that would force anti-war Democrats seeking to defeat Mr. Bush on issues such as extending unemployment benefits to also cast a vote for war money.

The underlying legislation would provide about $165 billion for the Pentagon to carry the wars in Iraq and Afghanistan into next year, along with foreign aid, funding for Louisiana levees and minor changes to the current-year budget such as additional money for the Census.