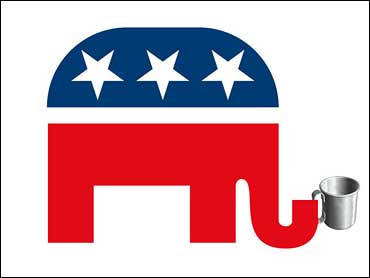 House rank and file Republicans are tens of millions of dollars short of meeting fundraising targets set by their own campaign committee in advance of this fall's elections, according to figures circulating among the leadership, heightening concerns inside the party about major losses in November.

Most recent figures show that GOP lawmakers have brought $27 million into the coffers of the National Republican Congressional Committee in the past 17 months, far short of the target of about $58 million. Compounding the challenge, they will soon be asked to raise another $20 million or more to help candidates in selected battleground districts.

Rep. Tom Cole of Oklahoma, chairman of the NRCC, provided the information recently to the leadership and to members of a newly formed committee charged with reinvigorating the campaign effort in the wake of the loss of three seats to Democrats in special elections. The AP obtained a copy of some of the documents involved in the presentations.

The disclosure comes in addition to other unsettling news for Republicans, who trail Democrats badly in cash on hand and are grappling with the alleged theft of more than $700,000 by a former employee.

The NRCC declined comment. Rep. John Boehner of Ohio, the party's leader in the House, is encouraging his colleagues to do more to help, a spokesman said.

"Mr. Boehner's focus right now is doing everything possible to help House Republicans be successful this fall, and that includes pushing all our members to do more to help our team," said his spokesman, Kevin Smith.

Republicans controlled the House for 12 years until they lost the majority in 2006. In the months since, their political position has eroded significantly, judging from polls, campaign fundraising and other factors.

The result has been a private acknowledgment among lawmakers and aides alike that the GOP is highly unlikely to regain the majority in 2008 and will be fortunate to hold its losses to a minimum.

Both parties have political committees that typically raise more than $100 million for the fall campaign. While much of the money comes from donors who receive mail or online solicitations or attend fundraising events, individual lawmakers also are expected to help.

The information Cole distributed included the total each Republican has been asked by the NRCC to raise, an amount that is highest for members of the leadership and lowest for first-term lawmakers facing competitive races in the fall. Republicans who hold the senior positions on each committee - the men and women who would take over in a Republican-controlled House - are given higher assessments than more junior colleagues.

The material also shows how much money individual lawmakers have brought in, either through fundraising calls to donors or from transfers from their own campaign treasury.

Cole has donated or transferred $1.4 million so far, more than anyone else. Boehner, at $1.26 million, is the only other Republican to top six figures. Both men had two-year assessments of nearly $1.13 million, according to NRCC figures.

Rep. David Dreier of California, who is the senior Republican on the Rules Committee, has raised more than $800,000, nearly meeting his assessment with several months remaining in the campaign.

But Rep. Thaddeus McCotter of Michigan, a member of the leadership, is credited with only $8,500 of nearly $950,000 he's been tasked with raising. "I've always met and exceeded whatever number they pull out of the air, and I intend to do so again," McCotter said in an interview. He said he represents a swing seat and usually takes care of his commitments to the committee later in the election year.

And strikingly, Rep. Tom Davis of Virginia, who was appointed head of the committee formed after the three election defeats, has raised only $50,000 against his assessment of more than $605,000, according to NRCC figures. Davis was chairman of the NRCC while Republicans held the majority, and he recently warned in a blistering memo that the party faces a political environment that is "the worst since Watergate and far more toxic than the fall of 2006 when we lost 30 seats."

Republicans concede that the perception of another impending defeat makes potential donors even less inclined to contribute.

Democrats currently hold 235 seats in the House, compared to 199 for the Republicans, with one vacancy.

The loss of formerly GOP held seats in Illinois, Louisiana and Mississippi in three special elections are the most dramatic demonstrations of the party's difficulties and sent shockwaves through the leadership. As a result, the new group was created, to be headed by Davis, to offer advice. Additionally, Ed Brookover, a highly respected former campaign committee aide, was recruited to return for the final months of the campaign.

Compounding the problem, the committee has spent months trying to untangle the affairs of a former key staff member, Christopher Ward, who is alleged to have stolen at least $725,000 from the organization. An internal probe alleged that the former treasurer used his authority to siphon money from 2001 and 2007. The FBI is also investigating.

Ward's lawyer, Ronald Machen, declined comment on the internal probe. The NRCC said it spent $500,000 to pay for the investigation and another $300,000 to upgrade its accounting operations.

Overall, the NRCC, which began the election cycle with a debt of more than $10 million, showed cash on hand of $6.7 million as of April 30 in its most recent report to the Federal Election Commission. The Democratic Congressional Campaign Committee reported cash on hand of $45.2 million.