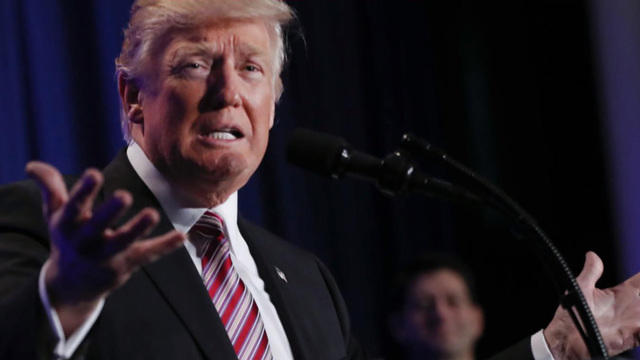 Hoping to garner signatures from both sides of the aisle, the petition calls for more transparency regarding the President’s taxes an issue of “national security,” in the hopes that the returns may disclose any of Mr. Trump’s financial interests abroad.

“It’s not a right to privacy that the president has,” Pelosi said, referring to Mr. Trump’s undisclosed tax records. “He’s the president of the United States.”

“There’s question about a Russian connection -- politically, personally, financially -- to the president. There’s concerns about recent actions by the Chinese government in relationship to the Trump organization,” she added.

“If they have nothing to fear, then what are they afraid of?” Pelosi queried.

Pelosi then introduced Congresswoman Anna Eshoo, D-Calif., who in June 2016 introduced the “Presidential Tax Transparency Act,” which would make the disclosure of federal tax returns compulsory for any presidential nominee of a major political party. If the discharge petition receives a majority of House signatures (an unlikely reality in a Republican controlled Congress), it will force a floor vote on the bill.

In January 2017, White House Adviser Kellyanne Conway said that Mr. Trump is “not going to release his tax returns” and that “Most Americans are — are very focused on what their tax returns will look like while President Trump is in office, not what his look like.”

A poll conducted by the Washington Post and ABC News in January found that 74 percent of Americans still believe that Mr. Trump should release his tax records, with 40 percent of those polled saying they care “a lot” about this information.

House Ways and Means ranking member Richard Neal, D-Mass., added, “This is not about the law, it’s about custom and practice. It’s a settled tradition.”