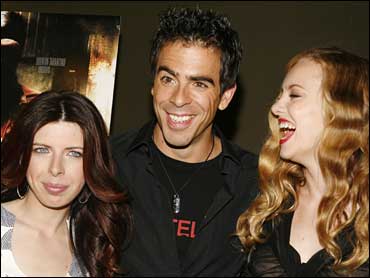 Can the sequel to the 2005 gore-fest "Hostel" possibly get any bloodier?

That was the big question as several hundred moviegoers, including horror fans and members of the media, gathered at the AMC Theater in Times Square for a private screening of "Hostel: Part II."

"It's easy to be gorier," writer-director Eli Roth told TheShowBuzz. "You can just add another tool, another body part. The challenge is to be better, scarier and smarter."

The movie, in theaters nationwide on June 8, tells the tale of three college-aged American women who get tricked into staying at a hostel in Slovakia where the "hosts," through an auctioning process, allow "patrons" to torture and murder guests.

Stuart, a high-bidding businessman played by Roger Bart, explains it best to Beth, one of the American girls held captive, played by Lauren German: "People come here to kill people."

But what really makes this movie different?

"The ending of this one is the show-stopper," Roth said. "It's gonna bring the house down."

Is there a "Hostel: Part III" in the works? Roth says it's very unlikely.

"No. No we cannot," said Roth, who shot the first two parts back to back. "I hate it when the third movie sucks. Unless you can do 'Return of the King' or 'Army of Darkness,' don't do it ... It's over ... Unless I come up with an inspiration that somehow blows away these two."

The screening was sponsored by The Museum of the Moving Image.