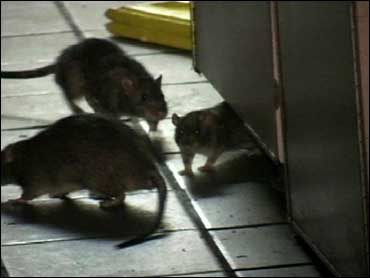 Even for New Yorkers who had seen everything, the sight was a jaw dropper: hordes of rats running freely through a closed fast food restaurant in the West Village.

Agile, plump, leaping and bounding from table to table, the rodents ran across the floor, between counters and tables and onto children's high chairs.

They even perched on top of an ATM machine.

Rats have long been a presence in New York, with such a dense population and such a large and readily available food supply for the rodents. But it is rare to see so many rats congregating in one place in public view, rather than scampering through subway tunnels, rooting through trash, or dashing across parks.

News crews flocked to the KFC-Taco Bell restaurant, and video footage taken through the store window was widely disseminated Friday on TV stations and the Internet.

Employees came to work Friday morning, but no customers were allowed in as health inspectors arrived.

CBS station WCBS-TV reported that the Department of Health had previously cited the location for health violations, include evidence of "live rats present in the facility's food and non food areas," and will keep the restaurant closed until it can re-inspect it.

The franchise was also cited for having rats on at least three previous occasions by the Department of Health since 2004.

Rick Maynard of KFC/Taco Bell issued a statement Friday, saying "This is completely unacceptable and is an absolute violation of our high standards. This restaurant has been closed and we are addressing the issue with the franchise owner. We will not allow this store to re-open until it is completely resanitized and given a clean bill of health."

The statement also assured customers that this was an isolated incident.

According to people interviewed at the scene by WCBS, the popular restaurant was open until 11 p.m. Thursday night. Others told the station that the problem has been going on for weeks.

"I love to eat at KFC, but this is disgusting," said Tameeka St. Jean.

One man claiming to be a former employee told WCBS correspondent Magee Hickey that he quit after one month because of what he called "filthy conditions."

"I quit because it was nasty," he said.

According to a statement by KFC/Taco Bell, construction in the franchise's basement on Thursday "temporarily escalated the situation."

Joel Cohen, who lives in the building next to the restaurant, had a more graphic view of the situation.

"I'm living over the place that is feeding the rats of New York City," said Cohen, who works in real estate. "This place is a disaster. They throw their rubbish in the doorways. It's loaded up with food in bags that are not tied, and the rats have eaten through the bags."