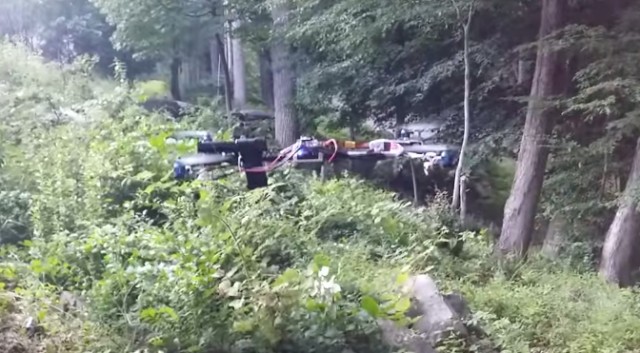 A video showing a controversial "flying gun" is raising new concerns among law enforcement agencies about potential threats from drones, but the Connecticut teenager who built the device may not have violated any laws, reports CBS News correspondent Mark Albert.

Austin Haughwout, an 18-year-old college sophomore, successfully built what is thought to be among the first armed civilian drones, and filmed the device flying on his family's property.

The armed drone was a wake-up call for law enforcement, including the Bureau of Alcohol, Tobacco, Firearms and Explosives (ATF). Despite their strong public safety concerns, the agency told "CBS This Morning" there appears to be nothing illegal about it, and they admit they have no way to prevent the next one.

The lightweight drone features a mounted semi-automatic handgun and is just over two feet long.

The video shows the gun being fired four times, and the drone is able to recover from the firearm's recoil to remain in flight.

Haughwout is no stranger to drone controversy. Last year, after he flew a drone over a public beach, an angry beach-goer attacked him.

The Central Connecticut State University (CCSU) student initially agreed to an interview with CBS News about his "flying gun," the same name used on his YouTube video, which has been viewed more than 2.5 million times, but then abruptly changed his mind in the wake of national media scrutiny.

He explained his drone project to CBS News by email, saying, "I am going for a degree in mechanical engineering and this was an application of the technology that I have access to and education provided by my university."

Haughwout's father Bret said his son built the drone with help from a professor.

But a CCSU spokesman disagreed, saying engineering professor Edward Moore "actively discouraged" Haughwout from building it, saying it was "simply too dangerous."

"That drone, the way it was used in the video, did not violate any current statues on the books in Connecticut," Clinton, Connecticut, Police Sergeant Jeremiah Dunn said. "It's a case of technology surpassing current legislation. Legislation not keeping up with the technology that's out there."

Bouchard was an incident commander for the 2002 Beltway sniper investigation, when two gunmen randomly killed 10 people in the Washington, D.C. area.

It took more than three weeks to track down who was firing those shots. Gunfire from a drone, Bouchard fears, could leave no trace.

"There would be no physical evidence; perfect crime," Bouchard said. "This can turn into a video game for sick people. They can play this out like a video game on their computer and shoot people without ever having to look them in their eye."

And, added Bouchard, potentially get away with it.

The FAA is investigating and could issue a fine if Haughwout violated its regulations.