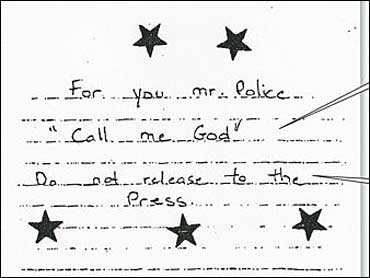 A letter left by the sniper suspects outside a Virginia steakhouse began with a cover sheet that said "Call me God" and demanded $10 million in extortion money in "unlimited withdrawal" around the world, law enforcement sources say.

"For you, Mr. Police. Call me God. Do not release to the press," says the letter, described Friday night by a federal law enforcement source familiar with the four-page document.

It was found tacked to a tree, wrapped in plastic, outside the Ponderosa restaurant in the Richmond suburb of Ashland, Va., where the sniper shot and wounded a 37-year-old man walking to his car after dinner with his wife on Oct. 19. The man is recovering at a hospital.

Authorities are virtually certain the letter came from John Allen Muhammad, 41, and John Lee Malvo, 17, who are suspected of the string of sniper shootings in Maryland, Virginia and Washington, D.C., that left 10 dead and three wounded. The pair is believed to have left two letters, along with a tarot card signifying death, at shooting scenes.

The letter includes the demand for $10 million, giving the 16-digit account number and a PIN number for a stolen Bank of America platinum credit card. "We will have unlimited withdrawal at any ATM worldwide," the letter says.

The credit card was stolen from a Greyhound bus driver in Flagstaff, Ariz., who told The Washington Post it was taken from a pouch behind her seat as she drove between Nogales, Ariz., and Flagstaff on March 25. Authorities later told her that her card was used to purchase gas in Tacoma, Wash., where Muhammad once lived.

The letter rails against operators of the sniper telephone tip line, which Muhammad or Malvo, or both, called at least six times, police say. It describes the operators, some of whom are named, as incompetent and says officials took the calls "for a hoax or a joke."

The letter, reproduced in Saturday editions of the Post, says "your failure to respond has cost you five lives."

"If stopping the killing is more important than catching us now, then you will accept our demand which are non-negotiable," the letter says.

The letter also included the chilling postscript, publicized worldwide by police: "Your children are not safe anywhere at any time."

Making contact with police was a clear goal of the letter. It gave a number for a phone booth outside the Ponderosa restaurant in Virginia, telling authorities to await a call and again warning that by complying with the demands "you will have less body bags ... If trying to catch us now more important then prepare you body bags. ... Word is bond."

That last phrase, whose origin is unclear but may have roots in Jamaican reggae music, appeared to be important to the letter writers, so much so that Montgomery County, Md., Police Chief Charles Moose said "Our word is our bond" in a Wednesday briefing that appeared aimed at communicating with the sniper.

Malvo, the teenage suspect, is originally from Jamaica.